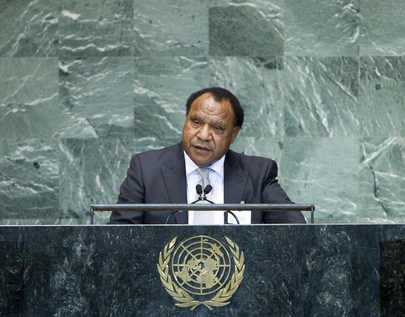 RIMBINK PATO, Minister for Foreign Affairs, Trade and Immigration of Papua New Guinea, said his country, which had celebrated the thirty-seventh anniversary of its independence in mid-September, had recently held successful general elections, which had culminated in the convening of its ninth National Parliament and the formation of a new Government.  Thanking all those who had helped with the process, including neighbouring countries in the region and the United Nations, he said Papua New Guinea’s short history was a testament to the will of its people to continue consolidating democracy according to the rule of law.

Highlighting his Government’s key development priorities for the next five years, he said it would, over the long term, culminate in the “Vision 2020” plan.  The economy would be strengthened, trade would be diversified and investment cooperation would be bolstered, all towards ensuring that the people’s basic needs were met.  Papua New Guinea was also investing in the future of its children by providing free quality elementary and secondary education, in addition to further subsidizing education at higher levels.  It was rehabilitating its major infrastructure — roads, transportation hubs, ports and health and education facilities — as well as increasing funding support to ensure the delivery of basic health and social services countrywide.

“Revitalization of our institutional and human resources capacity to take the country to higher development level is also a major priority,” he continued, noting also that the Government was adopting a “zero tolerance” policy on corruption.  To that end, it was establishing an independent anti-corruption commission to enhance implementation of the relevant United Nations treaty.  That and other initiatives would help improve governance, enhance basic service delivery, and provide opportunities for more stakeholders to take part in development, he said.  As for the economy, the annual growth rate was around 8 per cent, he said, underscoring the country’s political stability and solid macroeconomic management.

He went on to say that a sovereign wealth fund was being created to ensure professional management of revenues generated by the country’s liquefied natural gas project and other extractive industries.  “We hope to share this wealth with our pacific neighbours in an appropriate manner,” he said.  On other matters, he said Papua New Guinea continued to benefit from a strong United Nations presence, which the Government highly valued.  It had been a “self-starter” country in implementing the “Delivering as One” initiative, and while that strategy had been working well since 2006, he urged bilateral partners to abide by the principles of the Paris Declaration and the Accra Agenda for Action on aid effectiveness in order to ensure that development assistance was better coordinated.