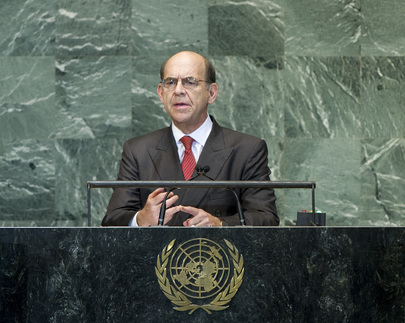 STUART BECK ( Palau) said that, having attained independence and improved living standards through the exercise of the rule of law, his country, the last United Nations Trust Territory, was determined to give back in kind to the international community. For that reason, it proudly contributed peacekeepers to United Nations missions and had endeavoured to protect marine ecosystems on a global scale, through efforts that had led to two General Assembly resolutions focused on the odious practice of deep sea-bottom trawling, and by the creation of the world’s first shark sanctuary. Palau had also been the first country to sound the alarm on the security impact of climate change, which had then been taken up by the Assembly and the Security Council.

Rio+20 and its follow-up had presented Palau with an opportunity to better integrate healthy oceans and fisheries into the development governance framework, he continued. Emphasizing that sustainable fisheries were his country’s lifeblood, he said global fisheries should be fair, adding that if distant vessels sought the fish that traversed Palau’s waters, they should respect its laws, fish within set limits and recognize the national right to the benefits of its own natural resources. “Illegal fishing is tantamount to piracy,” he stressed, adding that fish stock levels must be maintained to ensure healthy fisheries for the long term, which meant closing fisheries when necessary. Accountability in all those areas was crucial, he said, citing reports that showed that 87 per cent of global fish stocks were now fully or over-exploited. He welcomed the negotiations in 2011 that had allowed the relevant Assembly resolution to better reflect those principles.

Describing his country’s progress in the transition to a green economy and in improving its communications connections to the rest of the world for development needs, he said Palau continued to seek partners to help it establish broadband Internet, which could fundamentally improve health, business and civic engagement. Other major efforts included the continued removal, in collaboration with partners, of live explosives left over from the Second World War. As Taiwan was a major partner in such efforts, he called for that country’s meaningful participation in the United Nations system. He went on to condemn in the strongest possible terms the recent attacks on diplomatic premises, and expressed hope that tensions in the East China Sea would dissipate through dialogue. Regarding climate change, he said Palau had no intention of relocating its people, as suggested in certain reports on managing risks, as its islands were their home. However, the current situation of the United Nations Framework Convention on Climate Change was unacceptable, he said. “After more than 20 years of negotiations, we are running out of creative ways to say that countries are being destroyed.”