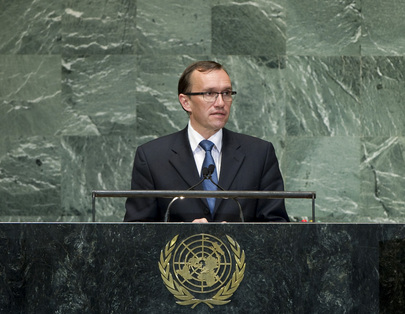 ESPEN BARTH EIDE, Minister for Foreign Affairs of Norway, said “leadership is about making choices”, adding “leadership is also about creating the conditions for people to choose how to live their lives”. Freedom was more than the mere absence of physical or legal obstacles, he continued, recalling that the purpose of the United Nations was to promote freedom for all — freedom from want, freedom from fear and the freedom to live in dignity. The crisis in Syria had begun with peaceful protests calling for freedom and dignity. The Syrian Government bore primary responsibility, and the privileges of the few should no longer stand in the way of the aspirations of the many. “Even in war there are rules,” he pointed out. “Do not expect to be pardoned by stating that your opponent did the same.” At the founding of the United Nations in 1945, it had been decided to establish a Security Council to act on behalf of Member States, he said. Norway’s delegation, at that time led by Trygve Lie — later to become the Organization’s first Secretary-General — had voted in favour of the right of veto, as had many other small and medium-sized countries. They had done so in order to reflect the world order of the day, but also to ensure that the Council would actually have the authority to make decisions and act “on our behalf”. They had done so not to hold certain States as superior to others, he stressed. Noting the current deadlock in the Council, he said: “Now we expect you to act. We expect you to put away outdated ideas of zero-sum games and spheres of influence and to strive to seek a common position. Enough blood has been shed.” While welcoming some positive developments concerning conflicts in Myanmar, Sudan-South Sudan and Colombia, he expressed concern about the Israeli-Palestinian situation. Noting that he was Chair of the Ad Hoc Liaison Committee for Support to the Palestinian Authority, he recalled that exactly one year ago, it had been agreed in New York that the Palestinian State-building process had reached “a level where the institutions of State are in place”. However, “great expectations were created, only to be frustrated”, he said, adding: “Time is running short, shorter than many seem to understand.” A two-State solution was the only path to sustainable peace, he emphasized, adding that negotiations remained the key. A strong United Nations was needed to international goals, he said, pointing out that intergovernmental micromanagement of what would be the Chief Executive’s prerogative in any modern organization was the opposite of making the Organization work. “Leaders have real choices,” he noted.