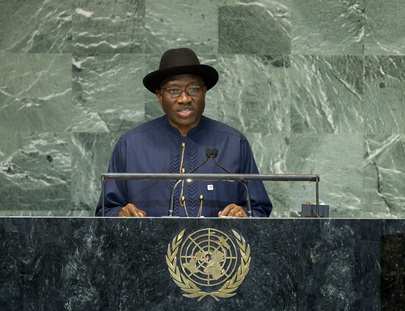 GOODLUCK EBELE JONATHAN, President of Nigeria, said the world was witnessing important and dramatic changes. The Arab Spring was setting new social contracts between Governments and the governed; South Sudan had gained independence, with some setbacks; and the situation in Syria continued to weigh on the collective conscience. Nigeria was ready to work with other countries to make civilian protection in conflict situations a United Nations priority. Nigeria’s 2010-2011 Security Council membership had allowed it to work with others in promoting the peace and security agenda, he said, urging recommitment to the long-overdue reform of that body so as to make it more equitable, inclusive and effective. With expanded permanent membership, the Council would benefit from the unique experience of regional representatives.

He said his Government’s response to extremist threats and militant activities sought to address their root causes and explore opportunities for dialogue. Nigeria had signed bilateral agreements with Cameroon, Niger and Chad, while the Lake Chad Basin Commission provided an excellent platform for multilateral cooperation. Such measures would stem the flow of small arms and light weapons. However, one issue deserving attention was the adoption of a legally binding arms trade treaty, he said. Such an instrument could regulate the transfer of conventional weapons and curb the illicit small-arms trade. The absence of a global consensus on controlling such weapons fuelled conflict and hampered growth.

Turning to peace and security matters, he underscored his country’s commitment to fostering regional and international peace and security, in close collaboration with the United Nations, the African Union and ECOWAS. The subregion had suffered some setbacks, with the political crisis in Mali stemming from unconstitutional governmental change and the emergence of insurgency. The Contact Group on Guinea-Bissau, headed by Nigeria, had worked to establish a transitional Government that would restore political and constitutional order. “ West Africa can ill afford renewed insurgency”, he cautioned, pressing the United Nations and others urgently to build upon recent gains to secure peace across the subregion.

For its own part, he said, Nigeria had played a crucial role in all recent developments on the continent, including the struggle for independence and self-determination, the fight against apartheid, colonialism and discrimination. The country was in the vanguard of the fight against extremism and terrorism, and remained unflinching in its resolve to protect its citizens. However, it needed international collaboration, he said, urging all like-minded stakeholders to address such issues with the seriousness they deserved. Nigeria would strengthen its cooperation with the United Nations in peacekeeping and ensure its continuing contribution to present and future operations.