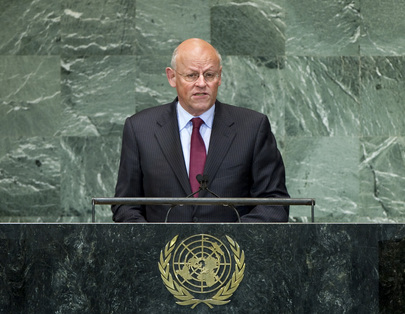 URI ROSENTHAL, Minister for Foreign Affairs of Netherlands, recounting his visit to a camp of Syrian refugees on the Turkish border, said that it was clear that the refugees needed the support of the international community for food, shelter and security, but ultimately, “they need an effective United Nations and a strong international legal order”. That legal order was enshrined in the Dutch Constitution, was pursued by the efforts of Dutch citizens working in Afghanistan and was embodied by the institutions in The Hague’s Peace Palace, the International Court of Justice and the Permanent Court of Arbitration. A stronger international legal order was needed to preserve peace and security, to protect freedom and to promote prosperity.

For peace, he said, the world needed a strong and more united Security Council, as shown by the disagreements on that body that prevented decisive action on Syria. Mediation, arbitration and judicial settlement of conflicts in a peaceful manner were tools that must be cherished and developed. Better implementation of existing treaties on non-proliferation, arms control and disarmament was also of paramount importance. In that regard, Iran must completely fulfil its obligations to the International Atomic Energy Agency (IAEA) and abide by Council resolutions. Noting the upcoming hosting of the Netherlands of the next nuclear summit in 2014 and the fifteenth anniversary of the Organization to Prohibit Chemical weapons in The Hague, he said that the international agenda on nuclear, chemical and conventional weapons must lead to concrete results and new treaties. Negotiations on a robust and effective arms trade treaty should recommence as soon as possible.

Turning to protection of freedom, he underlined the need for equal rights and empowerment of women, as well as the need to disseminate awareness, constantly, about the human rights obligations of States. To improve the Human Rights Council, it must be ensured that countries aspiring to membership were genuinely committed to human rights. In that light, he announced his country’s candidature for the period 2015-2017, and stressed that every State had an obligation to prevent serious rights violations. If countries could not or would not act, the international community had a responsibility to protect.

A stronger legal order also promoted prosperity and economic growth because trade, investment in innovation and development all benefitted from a predictable and rule-based climate, he said, adding that one of the lessons of what he called the Arab awakening was that an economy could not thrive in societies where human rights were violated, corruption was rampant and Government revenues were wasted. Stronger free trade agreements and a well-functioning World Trade Organization were also needed; foreign direct investment could be promoted by enhanced arbitration and conflict resolution mechanisms. In addition, protecting intellectual property rights fostered innovation. He maintained that the Millennium Development Goals needed a new agenda with greater engagement of the private sector to end poverty and foster sustainable development.

He said an effective United Nations was critical in all such areas, but he warned of a “widening gap” between expectations and what the Organization could actually deliver. For that reason, the Security Council should be reformed, with more influence for emerging powers, while their larger share in the world economy should be reflected in their contributions to the Organization’s budget. The Secretary-General’s reform proposals for coherence of the entire United Nations system must also be implemented. On their part, Member States must universally respect universal human rights without distinction, including the rights of sexual and ethnic minorities, recognize the compulsory jurisdiction of the International Court of Justice and join the International Criminal Court.