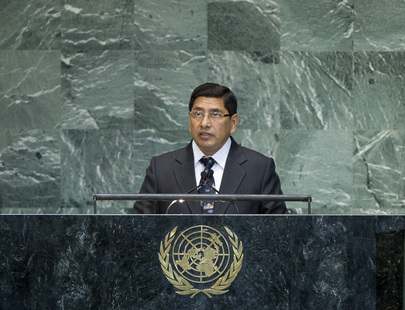 NARAYAN KAJI SHRESTHA 'PRAKASH', Deputy Prime Minister of Nepal, said that the concept of collective security, the core pillar of the United Nations Charter, had often been undermined with the recourse to means of dispute settlement outside the purview of multilateral mechanisms. Unilateralism and selective interpretation of the Charter risked inviting more conflicts and confrontation, rather than understanding and cooperation. While every country had the legitimate right to pursue its enlightened national interests, international norms and values needed to be observed when a country’s action affected another. That necessitated the wider respect for, and observance of, the principles of sovereignty, territorial integrity, political independence and non-interference as the bedrock principles of international relations. “These principles cannot and should not be made subject to political tests under any circumstances,” he said.

Nepal reiterated its call for general and complete disarmament of nuclear weapons and all other weapons of mass destruction in a time-bound manner. It was ironic that funding for the global development agenda and the fight against poverty had been overshadowed by global military expenses of over $1.7 trillion annually. Nepal welcomed the recent initiative towards conventional arms regulation within the United Nations and underlined the importance of an early conclusion to the arms trade treaty. As confidence-building dialogues and deliberations through regional mechanisms could greatly complement the goals of international peace and disarmament, he emphasized the importance of the revitalization of “the Kathmandu process” for promoting regional disarmament.

His country’s commitment to democracy, human rights, the rule of law and inclusive development was “unflinching”, he said. In that context, to address its post-conflict transition needs, Nepal had established mechanisms and processes for human rights protection and promotion, as well as their monitoring at the highest level and various tiers at the subnational levels. The country was further party to 22 human rights conventions, and was committed to controlling international human trafficking, and to making the maximum effort to ensure that the rights and interests of migrant workers were protected in labour destination countries. The National Human Rights Commission, an independent constitutional body, functioned as the country’s all-powerful watchdog for protection and promotion of human rights; Nepal was committed to strengthening that body.

Rio+20 had laid out a broad framework for global action and a post-2015 development agenda, he said. For effective implementation, he emphasized the reinforcement of the three pillars of sustainable development with poverty eradication, inclusive development and environmental conservation at the centre. He also asked for the fuller accommodation of the concerns of the developing countries, particularly the least developed countries, in defining the important aspects of finance, technology transfer and capacity-building. The least developed countries were suffering from dehumanizing marginalization and deprivation from basic necessities of life. “That state of affairs is a blemish on the sheer affluence achieved by the globalized world,” he said. Global sustainable development would not be possible without sustainable development of the least developed countries, including a substantial improvement in the quality of life of their 880 million people. The world must pay due attention, in words as well as deeds, to the special and differential needs and requirements of those countries.

Turning to the situation in his own country, he said that Nepal had yet to conclude its historic transition process, in particular with the promulgation of a new constitution from the Constituent Assembly and the completion of the peace process in totality. That Assembly had been elected for the first time in Nepal’s history in 2008, and was mandated to draft the constitution, addressing the aspirations of the people for change with the restructuring of the State. However, the Assembly was dissolved in May of this year, without having met its deadline. Nepal had made qualitative progress in the technical side of the peace process, mainly in the reintegration of former Maoist combatants. Political parties remained in dialogue and negotiation and were seriously committed to a consensus solution to end the impasse. Nepal believed that democracy, development and peace were interrelated and interdependent. It also thanked the international community, including the United Nations, for its support for the peace and constitution drafting process, and hoped that it would continue in to the future.