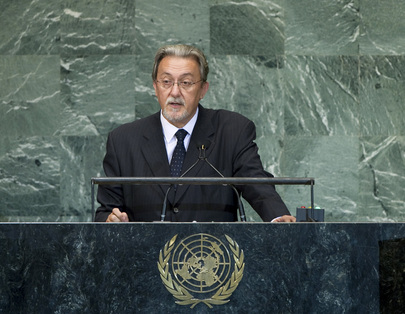 NEBOJŠA KALUDJEROVIĆ, Minister of Foreign Affairs and European Integration of Montenegro, stressed the individual responsibility of all countries to strengthen the rule of law and promote human rights. Failure to do so was a common concern. Strengthening international partnership in the maintenance and building of peace was also crucial, and his country shared the concerns of the world community for the recent developments in the South Mediterranean and Middle East. Outlining priorities, he said the “scale and consequences of the violence in Syria were a stern reminder” that the United Nations preventive capacities should be enhanced, as well as its role in promoting dialogue and mediation in peaceful conflict resolution. Responsibility to protect remained another key priority. In the era of accountability, perpetrators of crimes against humanity should not go unpunished. Countries should demonstrate strong commitment to the rule of law, respect for human rights and freedoms, democracy and non-use of force. He said his country was firmly dedicated to the comprehensive implementation of the Counter-Terrorism Strategy and it strongly supported global efforts towards disarmament and non-proliferation. Transnational threats, such as human trafficking, cybercrime, and the illicit drug trade, among others, required a comprehensive approach. As a multicultural country, Montenegro built its society on principles of tolerance and mutual respect. Six years since the restoration of its independence, the country had achieved significant progress, both in internal development and international relations. It had a very good relationship with all of its neighbours, while the region as a whole “stands before unique challenge to demonstrate that it is capable of reinforcing overall cooperation”. The region, after a turbulent past, shared a common strategic goal of European integration. Although issues remained in that regard, his country had achieved a new level of trust, development and maturity. Having opened European Union accession negotiations in June, it was committed to implementing reforms and reaching the highest international standards in such areas as rule of law, human rights, democratic governance and strengthened institutions. The country’s gains, however, did not imply an absence of problems, particularly in terms of the social and economic disparities, which, being quite visible, demanded stronger State efforts. At the same time, given Montenegro’s promotion and respect for human rights, he believed the country would be elected to the Human Rights Council for the period 2012-2015. Montenegro supported United Nations reform through “delivering as one”. Sustainable development was his country’s priority. In that light, Montenegro was on track to fulfil the Millennium Development Goals, which were a basis for defining the sustainable development goals and which must be part of the global post-2015 development agenda. United Nations members should compromise on issues of sustainable development and conclusion of a binding agreement on climate change, and commitment to fulfil the Millennium Development Goals should not be neglected despite the difficult economic and financial situation worldwide. At a time when interdependence and integration were major directions in global politics, “cooperation is a prerequisite for success”. He was confident that small countries like Montenegro could play an important role, he said, noting the nation’s strong commitment to strengthening the United Nations system and its role in global governance, both at national and international levels.