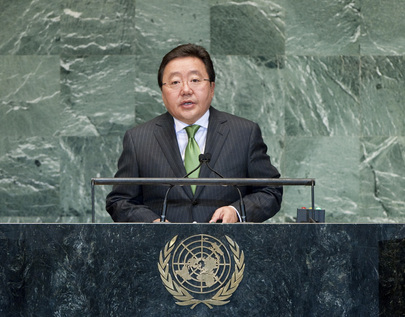 ELBEGDORJ TSAKHIA, President of Mongolia, said that his country had planted the flag of democracy in its rich soil more than two decades ago following a revolution that, without breaking a single window or spilling one drop of blood, “swept away decades of rule without consent of the governed”. Mongolia was now a stable beacon of good governance and was demonstrating its firm commitment to transparency, accountability and the rule of law. “We have recognized that this is the only way our democracy can succeed,” he said, stressing that his Government fought against corruption at all levels to ensure that “infectious disease” did not eat away at the public trust, scare away investors or rob citizens of opportunity.

He said that Mongolia’s track record of free and fair elections and peaceful political transitions could serve as examples to other countries in the region and around the world. Yet, no democracy was perfect and in its effort to move towards a more direct and participatory system, Mongolia had faced challenges. Indeed, casting ballots was just one priority for democratic progress, and Mongolia was also trying to maintain its extraordinary economic growth — nearly 17 per cent last year. Therefore, the Government focused on balancing two objectives: sharing the opportunities provided by the country’s success with ordinary citizens; and demonstrating that Mongolia “is open for business” and fully engaged in the affairs of the world. The nation’s needs were great — improved infrastructure, better healthcare and world-class education — and the Government was prepared to make the investments needed to ensure a better future.

Looking outside his country, he said that all nations must work together to protect the environment and preserve the planet’s natural resources, especially as emerging economies expanded and matured. His Government also urged respect for the protection and promotion of human rights. Mongolia was seeking to permanently abolish the death penalty, as it believed that capital punishment was barbaric and should be abolished by all Governments. Mongolia also cared deeply about protecting the planet and safeguarding world peace, and believed in that regard that all nuclear weapons must be eliminated. Strongly denouncing the storage of nuclear waste in his country, he said that all nuclear programmes and activities must abide by International Atomic Energy Agency (IAEA) standards.

“We must take unified action to preserve peace,” he continued, turning his focus to situations in the Middle East. He joined others throughout the week in expressing concern about the deadly attack on the United States consulate in Libya, and condemning the “needless violence and bloodshed” in Syria. What had begun as peaceful protests had slowly devolved into a crisis. “We must remember that those that are dying are not just citizens of that nation. They are our brothers and sisters [and] the world should be unified and direct in bringing this bloodshed to an end,” he declared, adding: “This is not a television programme. We, members of the United Nations, are not spectators. This body was not created just to watch the show unfold. We have to act.”

Turning to other issues, he called strongly for gender equality and women’s empowerment, saying that women were the backbone of families and bedrocks of nations. “We need more women leaders. Women tend to see the whole picture [and] for society to advance we need more women in public service at all levels,” he said, underscoring that women’s unique viewpoint was often missing as strategies were identified to cope with global challenges. The way to empower women was to ensure that girls had the same opportunities for education as boys. Concluding with a call for cooperation and good global governance, he quoted Genghis Khan, who built the largest land empire in history and had said: “It was easier to conquer the world on horseback than to dismount and try to govern.” For political leaders, it was not easy to build democracy. It is easier to build statues. It is easier to destroy. It is hard to govern well. But we must all “dismount and govern and govern well.” That would be vital for building a world where families were stronger and all nations were prosperous.