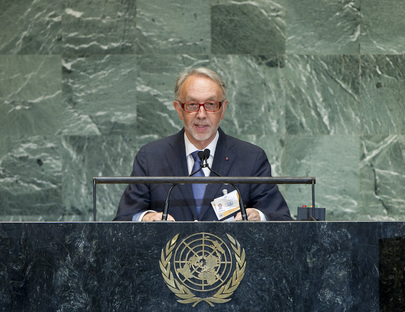 JOSÉ BADIA, Counsellor for Foreign Relations of Monaco, said the Secretary-General’s warning of multiple new threats should inspire and guide the work of the United Nations. Respect for the rule of law at the national and international levels was vital for responsible societies in ensuring the well-being of their citizens.

Recalling that the world had welcomed the spark of democracy in the Arab world in 2011, he said it was now intolerable that extremists were dampening the aspirations of those who wished to live in freedom. He condemned the violence in Syria, where the situation continued to deteriorate, and underlined the importance of ensuring that everyone respected international humanitarian law. Monaco was also concerned about the events in the Sahel, notably Mali, and supported all international actions in the region, given the urgency and gravity of the situation.

Expressing support for the United Nations strategy to address security, governance, development, human rights and humanitarian aspects, he said the Charter’s values were based on both common humanity and recognition of difference. In that vein, he paid homage to those serving those values. He condemned attacks on consular missions, urging that their protection be guaranteed in all circumstances. The Assembly’s theme on peaceful dispute settlement compelled the international community to unanimity, he said, assuring delegates of Monaco’s full support. Emphasizing that law prevailed over the right to wage war, he said international conflict-prevention efforts had fallen short.

He called for a focus on the sustainable development of oceans and the achievement of a “blue economy”, expressing support for all initiatives that sought to improve the work of the United Nations in that area. Underlining the importance of success for the Doha Conference on Climate Change, he said it was vital to agree on a second period of commitments under the Kyoto Protocol. He concluded by pointing out that the size of a State was not the “deciding factor” in solving global problems, but rather its ability to cooperate.