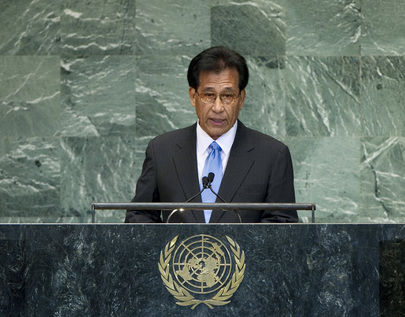 EMANUEL MORI, President of the Federated States of Micronesia, said climate change was the biggest challenge facing his country, not only the projections of future loss and damage, but the dangerous impacts that “my people are experiencing now as well”. Sadly, no significant progress had been made on climate change mitigation to date, he noted, adding that he had asked himself time and again: “How do I tell my people that their plight and their future lie in the hands of those most responsible for greenhouse gases?” Stressing the need to increase collective efforts to confront global climate change more urgently and creatively, he called on major emitters to step up their engagement under the Kyoto Protocol’s second commitment period. In that regard, he said his Government was pleased with the agreement reached at the Rio+20 Conference to begin cooperation on a global phase-down of production and consumption of hydrofluorocarbons, having first proposed amending the Montreal Protocol in 2009. Today it remained the ideal instrument for that task.

As a Pacific small island developing State, “our livelihood, our economy, our culture and our way of living are tied to a blue economy”, he said, emphasizing that conservation and the sustainable use of ocean resources was vital to achieving sustainable development. He said the rising cost of global energy continued to pose a serious challenge to socioeconomic development and sustainability, pointing out that small island developing States like his own continued to rely heavily on imported fossil fuel despite the abundance of renewable energy sources. Their unique and particular vulnerabilities often translated into significantly higher costs for energy infrastructure and fossil fuels. As a result, the Government spent a high percentage of its limited budget on fossil-fuel procurement alone, often at the expense of other sectors of the economy.

With his country’s health-care system increasingly under stress, he said the constant challenge posed by the growing burden of non-communicable diseases had reached epidemic proportions in the Pacific. While recognizing that primary responsibility for health rested with the Government, he sought international assistance in capacity-building, institutional-strengthening and policy formulation. The Government supported greater participation by women in social, political and economic development, and looked to development partners to help raise investment in that field to ensure that the potential of women was nurtured and realized through quality education, health-care services and protection against domestic and gender-based violence.

Concerning the United Nations, he said the Organization’s single most urgent need was reform of the Security Council. “Naturally, such an important step must not be taken in haste, but, after more than a decade of talking, we should be closer to finding an acceptable formulation”, he said, adding that it was time to “walk the talk”. Success on that matter would strengthen the world body while stimulating and renewing confidence in its Charter. “Success breeds success,” he noted. On peace and security, he said his country’s isolation — surrounded as it was by the vast expanse of the Pacific Ocean — no longer shielded it from the threat of international terrorism. Globalization had long had a foothold, and Facebook now linked its people to the world. Quoting from the nation’s Constitution, he said: “The seas bring together, they do not separate us. We extend to all nations what we seek from each: peace, friendship, cooperation, and love in our common humanity.”