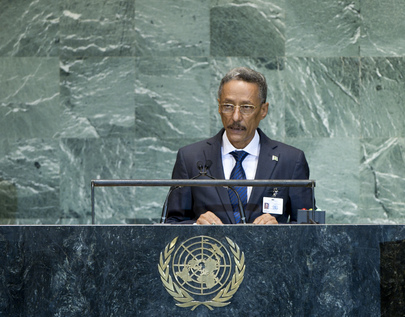 HAMADY OULD HAMADY, Minister for Foreign Affairs and Cooperation of Mauritania, said his country was organizing a peaceful transition from repressive regimes towards a democracy based on constitutional institutions and a series of laws guaranteeing political, individual and collective freedoms. It had committed to agreements on settling the refugee situation with Senegal, and was committed to efforts aimed at reforming the United Nations, notably the Security Council, in which two additional permanent seats should be established for African and Arab countries, he said.

Commending the outcome of the Rio+20 Conference, he said he also appreciated the results concerning the fight against the illicit trade in small arms and light weapons. However, many developing countries were far from winning the race to achieve the Millennium Development Goals, which had been affected by a drop in foreign investment, among other things. Rich countries must honour their obligations on development financing, he stressed. For its part, Mauritania had launched the Hope Plan 2012, a $170 million emergency agricultural intervention project that provided food, animal feed and drinking water, among other things, with a view to reduce hunger. The Government had introduced other programmes to bolster the health sector.

Regarding the Sahel region, he expressed concern that it had become a sanctuary for organized crime, terrorism and trafficking in drugs, arms, munitions and human beings. Chad was also concerned about the situation in Mali and hoped the Security Council would take action to re-establish governmental authority throughout its territory. Condemning the coup d’état, he reiterated Chad’s support for a united Mali, noting that Mauritania had done its best to accommodate Malian refugees. Conscious of the links between security, development and democracy, Mauritania’s Armed Forces were active against armed terrorist groups that threatened peace, he said.

Turning to other current situations, he said he was very concerned about the escalation of violence in Syria, and expressed support for the Joint Special Representative’s efforts to open a path to finding a solution. Chad was pleased with the democratic transitions in Tunisia, Yemen, Egypt and Libya, and hoped a peaceful solution would be found on all pending issues between Sudan and South Sudan. Satisfied with the recent elections in Somalia, he expressed hope that peace and security would endure after two decades of armed conflict. Mauritania was closely following developments concerning Western Sahara and supported the Secretary-General’s efforts to find a lasting solution that benefitted both parties.

Turning to the Arab-Israeli situation, he said it posed grave threats to international peace and security. He invited the international community to approve the Palestinian request for enhanced status at the United Nations. “This is the only way to end the suffering of the people,” he said. He also condemned Israel’s embargo on the Gaza Strip, the crimes perpetrated by the Israeli war machine and the destruction of Palestinian infrastructure. Promoting the culture of peace and the values of tolerance among peoples and civilizations was the right way to safeguard peace and security in the world, he said, adding that Mauritania rejected any form of terrorism or extremism. The noble ideals that had guided the United Nations since inception would only be respected if the world’s peoples could benefit from the potential of development while respecting the values of freedom and equity, he said.