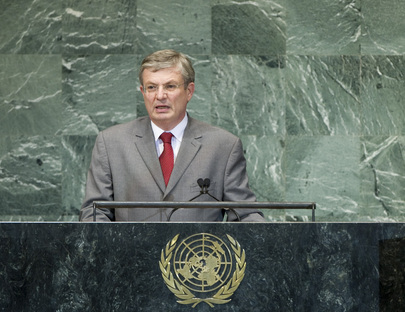 TONIO BORG, Deputy Prime Minister and Minister for Foreign Affairs of Malta, lamented that extremists persisted in their efforts to derail the Arab Spring’s call to end oppression and injustice. He stressed the importance of protecting the inviolability of diplomatic premises and personnel as well as reiterating the collective condemnation of the deplorable acts perpetrated recently in various capitals in the region. Many had doubted the success of the Arab Spring and feared its call for change. But “change” did come, as seen in the first seeds of democracy blossoming in places previously unthinkable. And more “change” was yet to come. Malta knew all too well what that call for change was about, as it received those fleeing war, hunger and persecution. “We need to give these people safe refuge, and we do so with a sense of solidarity and a strong belief that every human life is worth saving,” he said, stating Malta’s commitment to give assistance and continue its historic role of welcoming those bereft of their human rights and dignity.

He called upon the international community to give those people genuine alternatives and to no longer accept that it was a problem in someone else’s backyard. “We want to ensure that the attainment of the Millennium Development Goals do not become a simple check-marking exercise, but instead underscore a truly global effort that will lift millions out of deprivation, disease and discrimination,” he said. He saluted Libya’s recent success in holding its first free and fully democratic elections. The situation in Syria, however, was troubling. Oppression and violence were never the solution. The international community had a moral duty to ensure that the Syrian people were not abandoned to a tragic fate.

Now could be the right time for a new era for the entire Mediterranean basin, which had known too many wars, too many divisions and far too many prejudices, he said. He reaffirmed Malta’s commitment to promote peace and prosperity across the region and beyond. Malta’s initiative to convene a European Union-League of Arab States ministerial meeting in Malta in 2008 specifically aimed to attain that. He lauded the decision to hold a “Malta II” conference in Cairo in November. In the coming days, Malta would host the 5+5 Heads of State and Government Meeting of the Western Mediterranean Forum, which should offer an excellent opportunity to discuss such issues. He hoped the forum would meet the aspirations of the peoples of the Mediterranean basin to implement concrete action in Euro-Mediterranean dialogue, transcending ineffective declarations, statements and conclusions. “We cannot fail in this regard. We owe it to our peoples,” he said.

The call to rise above the stalemate was nowhere more evident than in the Middle East peace process, he said. Bickering over who did what and when should not be the way forward. Forging common ground did not equate with giving in. The international community must redouble its efforts and could not rest until the world welcomed a truly stable, secure Middle East. He reaffirmed Malta’s commitment to the efforts of the United Nations and the European Union to achieve a two-State solution. One year from now the world should be talking about a Middle East peace, not a Middle East peace process. The Arab Spring showed that the time to answer the call of history was now. This time it could be different.