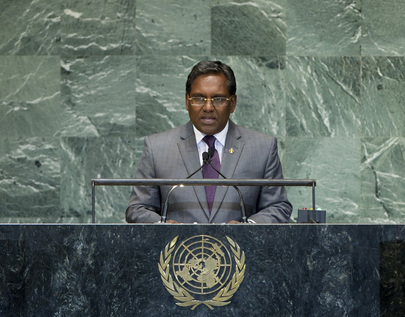 MOHAMED WAHEED, President of the Maldives, expressed support for the ongoing democratization in the Middle East and North Africa, applauding Tunisia and Egypt on having held their first post-transition elections freely and fairly. Welcoming the latest findings of the United Nations Commission of Inquiry on the human rights situation in Syria, he urged that country’s security forces, as well as anti-Government groups, immediately to cease all hostilities and end the violence. Tolerance and mutual respect should prevail among different religions and cultures, he emphasized, strongly condemning the recent video demeaning the Prophet Muhammad. Freedom of expression should not be used as a pretext to insult religions, incite hatred or provoke communal violence, he said, stressing at the same time that violence should not be the response to such “low-level blasphemous acts”, and condemning the attacks on the United States consulate in Benghazi. He expressed hope that Palestine would join the United Nations as a full member, and called on all Member State to support the Palestinian people’s aspirations and their right to self-determination.

Climate change was the most important, complex development facing small States, he said, citing the threats of sea-level rise, ocean acidification, changes in average temperature, and the “variability of precipitation events”. Coastal erosion was a serous problem, affecting more than 113 islands of the Maldives archipelago, he said, adding that another 120 needed emergency water during the dry season. The Government now spent more than 27 per cent of its national budget on building resilience to climate change, he said, reiterating his call for a binding agreement on reducing global carbon emissions. The world could not afford to wait any longer for one. As one of the world’s smallest economies, the Maldives contributed just 0.003 per cent of global carbon emissions, but since it was the most vulnerable to climate change, it was taking difficult and bold measures to combat the phenomenon.

One of the first countries to eradicate carbon emissions well ahead of time, the Maldives intended also to lead in eradicating hydrochlorofluorocarbons by 2020 and banning hydrochlorofluorocarbon-based equipment, he said. Many small islands were scaling up renewable energy, not only to avoid spending gross domestic product on imported fossil fuels, but also to reduce harmful emissions, he continued. The Maldives was converting to solar or hybrid sources and 20 of its islands would switch to renewable energy by next year. Such measures were part of a national initiative to transform the economy into a low-carbon one. “If we can take these measures, why can’t the larger States, endowed with more resources, take stronger measures?” he asked, calling on carbon-emitting countries to develop and use clean, renewable energy to reduce their carbon footprints.

He said his country’s transition to democracy, begun four years ago after its first competitive multi-party presidential election, had been a pressing challenge, particularly over the past eight months. The elected President had resigned in February, claiming later that he had been forced to do so, and the Government had established a commission of inquiry to investigate the allegations. Some States had taken sides in the domestic political crisis, making a bad situation worse, he said, adding that the Maldives now sought, and was receptive to, new ideas, regardless of who provided them. International cooperation should help, not hinder, a country’s march towards a better, democratic society, nor should it be used as an excuse to interfere in the domestic politics of small States, which were vulnerable in many ways, he said. Now was the time for large States to help smaller ones by recognizing their unique challenges and reviewing ways in which to extend cooperation to them.