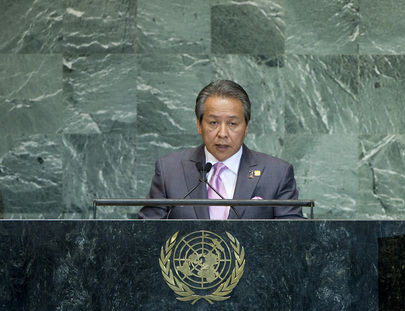 ANIFAH AMAN, Minister for Foreign Affairs of Malaysia, said it was difficult to understand why those responsible for the release of the film, Innocence of Muslims, and the publication of offensive caricatures could resort to such actions, knowing those would provoke 2 billion Muslims.  He could only ascribe that to “blatant malicious intent”.  Peace-loving people and responsible Governments must work to prevent a “small minority of bigots to sow the seed of hatred between the Muslim world and the West”.  He was equally saddened by the ensuing violence; one life lost was too many.  All those involved were guilty of extremism and must be held accountable.  Such actions could not be defended under the pretext of human rights, freedoms, and liberties.  It was time to delve deeper into the heart of the problem, namely, the relationship between freedom of expression and social responsibility.

The authors of the Declaration of Human Rights, he was certain, did not have denigration in mind when they cited the need to protect freedom of expression.  “When we discriminate against gender, it is called sexism; when African Americans are criticized and vilified, it is called racism; when the same is done to the Jews, people call it anti-Semitism; but why is it when Muslims are stigmatized and defamed, it is defended as freedom of expression?” he asked.  The principle of moderation should be ingrained in all societies, as that implied a high degree of tolerance, trust and mutual understanding, and emphasized dialogue as an important tool for resolving disputes.  Moreover, it was important to practice moderation in light of the “rising tide of extremism”.  The Global Movement of Moderates had gained the recognition and support of the Commonwealth, Non-Aligned Movement, and ASEAN.

He said his country remained seriously concerned about the situation in Syria.  Any next step should be contemplated with the interest of the Syrian people in mind.  Ultimately, it was not about who was wrong or right, but about putting an end to the bloodshed and resolving the conflict, in a peaceful and inclusive manner.  The situation in the Occupied Palestinian Territory was also bleak, as, for more than six decades, the people of Palestine saw their lands confiscated to make way for settlements, and they saw displacements and evictions, including of children.  Elsewhere, the international community was quick to call for action for those living under oppression, but it was “unashamed in not taking strong and decisive actions for the long-deprived Palestinians”.  Surely, the international community, especially the powerful and influential nations, could do more to bring Israel to the negotiating table.  With the declaration that emerged from the High-level Meeting on the Rule of Law, it was time for the international community to pressure Israel to fulfil its international obligations.

Why was Palestine punished for wanting to become a rightful member of the United Nations? he wondered.  With 132 countries recognizing the State of Palestine, it was clear the issue was tied to another, bigger one, namely the veto power in the Security Council.  That was just another of the host of reasons why the United Nations, especially the Security Council, should be reformed.  There were so many instances where the Council had failed to take action when action was needed most.  “Time and time again, [the Council] has become a victim of its own creation”.  Its composition should also reflect current global realities.  It was ironic that the very institution formed in 1945 to promote and defend democracy was, itself, undemocratic.  Virtually every aspect of reform had been argued, and many proposals had been submitted, yet none had made headway.  Indeed, “we are nowhere closer to actual reform than when we first started,” he asserted.  He called on States to be “realistic” and find workable solutions to reform.