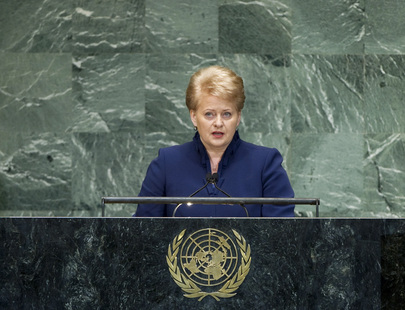 DALIA GRYBAUSKAITĖ, President of Lithuania, drew the attention of the Assembly to one specific area: energy. Competition for natural resources had long been the source of conflicts, as energy resources were not equally distributed and existing energy dependencies were cause for abuse, not for cooperation. In addition, a lack of clear and globally accepted rules and norms in the energy sectors contributed to continuing tensions. Recurring gas and oil supply crises every year reminded the world that, in a global environment, friction and disagreements over energy still led to conflicts and tensions. Lithuania, as a small country without its own source of natural energy, was well aware of the negative consequences of energy dependency in an environment without universal agreement on and compliance with “clear rules of the game”.

“What is to be done?” she asked. First, global energy sustainability needed to be increased. In that regard, she noted the Secretary-General’s “Sustainable Energy for All” initiative, which was both relevant and timely. Second, existing inequalities in access to energy must become a source of cooperation, not tension. The use of energy dependency as an instrument for “political or economic blackmail” must be eliminated. With the existing practices of price-fixing and abuse of monopolistic positions — both of which distorted competition — there could be no development, no security and no effectiveness.

Third, the answer to energy-related conflict prevention should be international agreements which made clear that the use of energy to gain political goals was unacceptable. Responsibility for violations should be clear and unavoidable. In that vein, international institutions must be granted greater discretion to launch probes and impose sanctions that hindered the free flow of energy resources, impede diversification or set unfair prices for customers.

“There can be no sustainability, no development and no peaceful cooperation without nuclear safety”, she said. While each country could decide its own national energy mix, those decisions could have devastating trans-boundary impact, and should be extremely well-grounded and researched. “Mistakes in nuclear energy are too costly to be allowed,” she said, in that respect, welcoming the actions taken by the International Atomic Energy Agency to improve the existing system of international nuclear safety regulations. Lithuania believed that nuclear safety standards should be strengthened, and, if needed, legal international imperatives should be adopted.

The 2012 Seoul Nuclear Security Summit had clearly indicated that nuclear safety and security measures should be designed, implemented and managed in a coherent and synergistic manner, as they both had a common aim to protect the people and the environment. Keeping that in mind, Lithuania had contributed to international efforts to increase global awareness on the existing energy insecurities and ways to prevent them by establishing its Nuclear Security Centre of Excellence. Finally, she said, in order to tackle the causes, not the consequences, of conflicts, “we have to be honest players”. Problems must be honestly defined, and their reasons must be openly discussed. States must “find in ourselves the political will to play according to these rules globally”, she concluded.