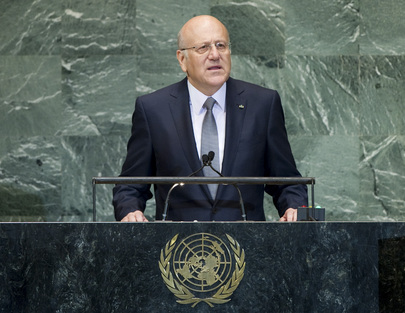 NAJIB MIKATI, Prime Minister of Lebanon, said that at a time of legitimate Arab demands for reform and change, their goals would only be met through dialogue rather than violence and foreign interference, he said. Regarding the Syrian crisis, Lebanon could not alone handle the increasing number of refugees displaced by the conflict, he said, calling for international assistance and efforts to ensure a political consensus on ending the violence, which claimed hundreds of lives each day. As for the question of Palestine, Lebanon supported the people’s right to return to their homeland and to have an independent State, he said adding that recognition and acceptance of such a State as a full United Nations member should pave the way for a just political settlement of the Palestinian cause and end the historical injustice the Palestinian people had suffered since 1948.

Committed to peace in south Lebanon, he reaffirmed his country’s commitment to Security Council resolution 1701 (2006), pointing out, however, that Israel had committed more than 9,000 violations of Lebanese sovereignty and territory since 2006. Its actions imposed limits on the United Nations Interim Force in Lebanon (UNIFIL) and its freedom of action while threatening the security of its members, he said, appealing to the international community to exert pressure to ensure that Israel respected international resolutions and international law. He also called for full implementation of General Assembly resolution 192/66 on the oil spill caused by the 2006 Israeli war on his country, adding that Lebanon remained committed to defending its exclusive economic area and maritime borders, as set by international law.

Lebanon was a crossroads of religion, communities, cultures and civilizations committed to religious and human values, freedom of speech, tolerance, dialogue, diversity and integration, he said. Building confidence and fostering mutual understanding was essential to ending violations of religious symbols once and for all. Committed to regional peace, Lebanon wished to see elimination of weapons of mass destruction, he said, noting that Israel was the only country in the region to possess such arms, and that following its creation in 1948, that country had persisted in violations of international law. “Stability cannot occur without a Palestinian Spring through the full implementation of the Palestinian right to self-determination on their land,” he stressed.

“The Arab world is witnessing one of the most sensitive periods of its modern history,” he continued. “We have reached a point where communities must make choices that will translate their ambitions into reality.” Lebanon had proven itself as an example of a democratic, tolerant and pluralistic country, and it was the international community’s duty to insulate it from the turbulent region around it, he said. “For it is only then that you would be providing our unstable region with a real source of inspiration: a viable nation and a vibrant one, full of life and a model for civil and religious liberties, social diversity and political freedoms.” He urged the international community to see Lebanon not as a responsibility, but as an opportunity to provide the safest and fastest way towards all that the Middle East could be — democratic, peaceful and prosperous.