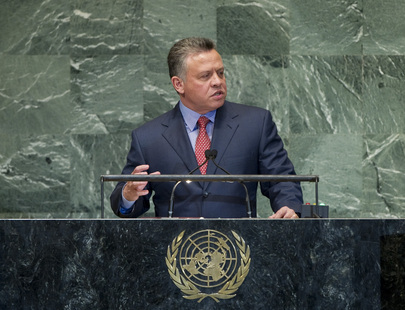 ABDULLAH II, King of Jordan, welcomed world leaders of many religions who had stood with Muslims worldwide in rejecting provocations meant to divide those of different faiths. He condemned all acts vilifying the Prophet Muhammad or falsely using his name — or that of Islam — to justify violence. “There are no sidelines on this issue,” he stressed. Every faith everywhere must be proactive in promoting understanding, he said, adding that the first four words of the United Nations Charter — “To unite our strength” — were not just an old dream, but “a modern urgency”. The United Nations was needed as never before.

He said important tasks ahead in the Middle East involved providing better opportunities, especially for young people, averting regional instability and fulfilling the basic human right to live in freedom, dignity, justice and peace. Jordan, for its part, was guided by mutual respect and moderation in its “Arab Spring” journey to accelerate home-grown reforms and achieve national goals. Since 2011, constitutional amendments and new laws had created a matrix of institutions and principles that supported democratization, he said, adding that Jordan would have a new Parliament next year.

Turning to the tragic situation in Syria, he said the violence must end immediately and a transition must begin now. There was no alternative to a political solution that would end the bloodshed, restore security and preserve both Syria’s territorial integrity and the dignity of its people. Jordan would support the new Special Representative of the Arab League and the United Nations. More than 200,000 Syrians had sought refuge in Jordan since the beginning of the crisis, and while that had put pressure on its economy, the country would continue to shoulder that responsibility, he said, adding that international support was essential.

As for the crisis at the heart of the region, he said Palestinians had been the exception to the United Nations promise of shelter under international law, the dignity of living in freedom and security, and the right to self-determination. No issue stirred more anger than telling an entire people that they did not count when it came to global justice. The “Arab Summer” could not bear its full fruit until the Palestinian-Israeli conflict ended with a just peace and a Palestinian State, living side-by-side with a secure Israel. Illegal settlement-building and unilateral actions threatened a negotiated peace. Jordan was also extremely concerned about threats to Jerusalem and the sanctity of its Muslim and Christian holy sites.

With Al-Aqsa Mosque and Compound under Hashemite custodianship and protected by international law as occupied territory, he warned, any invasion or division of Al-Masjid Al-Aqsa would be viewed not only as a breach of Israel’s obligations, but as a profound religious transgression. A clear message must be sent that such actions would not be tolerated. The world could not afford continuing hostility. There was a potential opportunity after elections in the United States to achieve a solution that would see two States at peace — Palestine and Israel — secure and free to look forward on the basis of a just, comprehensive and final settlement. “The Arab world is seeking peace, real peace”, involving diplomatic and economic relations, and a new normality wherein people would be safe in their homes. That prospect had been on offer since 2002 under the Arab Peace Initiative, through which 57 Arab and Muslim countries had reached out to Israel, he noted, emphasizing that it was time for Israel to turn around and make peace with the Palestinians. Almost three generations after the creation of the United Nations, it was not enough simply to make the right choices. “We must also pursue effective action.”