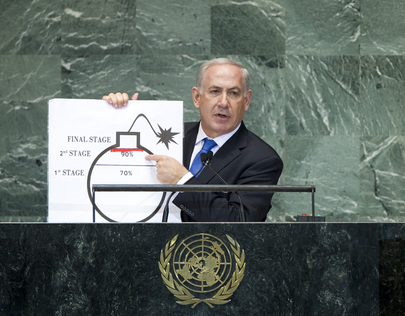 BENJAMIN NETANYAHU, Prime Minister of Israel, told the Assembly that, three thousand years ago, King David had reigned over the Jewish State in its eternal capital, Jerusalem. In saying that, he addressed, in particular, those who proclaimed that the Jewish State had no roots in the region, and that it would soon disappear. The Jewish people had lived on, and “the Jewish State will live forever”, he said. Even after it was exiled from Israel, the Jewish people never gave up the dream of returning to their ancient homeland; over time, they had restored independence and rebuilt their national life. “The Jewish people have come home, and we will never be uprooted again,” he stressed.

Yesterday, on the holiest day of the Jewish year, Yom Kippur, Jews had taken stock of the past, prayed for the future, and remembered the sorrows of persecution, including the extermination of a third of its people — 6 million — during the Holocaust. But, at the end of the day, they had celebrated the heroism of their people and the marvel of the “flourishing, modern” Jewish State. “We walk the same paths tread by our patriarchs”, but “we blaze new trails in science, technology, medicine and agriculture”, he said, adding that the past and the future found common ground in his nation. Unfortunately, that was not the case in many other countries, as a great battle was being waged between the modern and the medieval. Modernity sought a bright future in which the rights of all were protected and life was precious. The forces of medievalism sought a world in which women were subjugated, and in which rights were suppressed and death, not life, was glorified. Nowhere was that more stark than in the Middle East, he said.

Israel stood firmly with the forces of modernity. Its exceptional creativity was matched by its remarkable compassion, he said, describing Israeli humanitarian efforts during recent crises in Haiti, Japan, Tunisia and elsewhere. Israel treated thousands of Palestinian Arabs in its hospitals. Indeed, it was because Israel so cherished life that it also cherished and sought peace. It sought to preserve historic ties with Egypt and Jordan, and to forge a lasting peace with the Palestinian People. However, he emphasized, “we won’t solve our conflict with libellous speeches at the United Nations” or with “unilateral declarations of statehood”. Instead, the parties must sit together to negotiate a solution in which a demilitarized Palestinian State recognized the one and only Jewish State.

Israel wanted to see the three great religions that had sprung from its region coexist in peace and mutual respect, he went on. But, the forces of radical Islam, which sought supremacy over all of Islam, wanted to extinguish freedom and “end the modern world”. It had many branches, from the rulers of Iran to Al-Qaida terrorists to the radical cells lurking in every part of the world. They were all rooted in the same “bitter soil of intolerance”, he said, and they were directed at their fellow Muslims, at Christians, and Jews, at secular people and at anyone who did not submit to their creed. However, he stressed that “ultimately, they will fail… ultimately light will penetrate the darkness”. Ignorance had given way to enlightenment in the past, and so, too, would the Middle East once again be guided not by fanaticism and conspiracy, but by reason and curiosity. The question was not whether fanaticism would be defeated, but how many lives would be lost before it was defeated.

In the past, those who opposed fanaticism had waited too long to act, at a “horrific cost”. That could not happen again. “Nothing could imperil the world more than the arming of Iran with nuclear weapons.” Likening a nuclear-armed Iran to a nuclear-armed Al-Qaida, he said that both were fired “by the same hatred, and driven by the same lust for violence”. He pointed to the actions of Iran to date, even without nuclear weapons: it had brutally put down protests for democracy in its own country in 2009, and abetted the killing of American soldiers in Iraq. It had turned Lebanon and Gaza into terrorist strongholds, embedding thousands of rockets and missiles. Thousands of those had been fired at Israel by their terrorist proxies. It had even plotted to blow up a restaurant a few blocks from the White House, and continued to deny the Holocaust, as it had done again this week at the United Nations. Given that record of Iranian aggression, he asked the Assembly to imagine its actions with nuclear weapons. In that context, “who among you would feel safe in the Middle East?” Who would feel safe in Europe, in America or anywhere?

Some believed that a nuclear-armed Iran could be deterred, as the Soviet Union had once been. But, that was a dangerous assumption. Secular Marxists were very different from a country with suicide bombers, he warned. For Iran, in fact, mutually assured destruction was not a deterrent, it was an inducement. One of their leaders had said that using a nuclear weapon on Israel would destroy everything, but it would only “harm” the Islamic world, and, thus, it was not irrational to contemplate such a reality. And that was coming from a so-called moderate.

He had been speaking about the need to prevent Iran from acquiring a nuclear weapon for 15 years, but now “the hour is getting very late”. Diplomacy had not worked, as Iran had used those negotiations to bide time to advance its nuclear programme. Strong sanctions had had an effect on the Iranian economy, but they had not stopped the country’s nuclear programme. At this late hour, there was one way to prevent a nuclear-armed Iran, and that was to “place a clear red line” on its nuclear programme, he said. “Red lines don’t lead to war, red lines prevent war”, he said in that respect, describing several incidents in history where that rule had been proven true; for example, the North Atlantic Treaty Organization (NATO)’s red line had prevented war in Europe for half a century, and the invasion of Kuwait by Iraq and other conflicts might have been avoided with a clear red line.

To be credible, he said, such a line must be drawn, first and foremost, on Iran’s efforts to enrich uranium. Producing a diagram of a bomb and a fuse, he demonstrated how much enriched uranium was needed to produce a nuclear weapon, and showed the three stages that Iran would go through in order to do it. It was currently well into the second stage and, at current enrichment rates, it would finish the second stage by next spring or summer. That information was not as secret; it was based on IAEA reports that anyone can read online. “If these are the facts — and they are — where should a red line be drawn?” he asked, and answered that it should be drawn before Iran completed the second stage of nuclear enrichment. “Each day, that point is getting closer”, he stressed, and everyone should, therefore, have a sense of urgency. While intelligence agencies had saved many lives, “they are not foolproof”, and he urged the international community not to take such a risk. Instead, he believed that, “faced with a clear red line, Iran will back down”.

Just days ago at the United Nations, United States President Barack Obama had reiterated that a nuclear-armed Iran could not be contained. Indeed, the goal to prevent such a reality united Israelis and Americans, as well as others around the world. “Together we can chart a course forward,” he said. The Jewish people had always looked towards the future and worked to expand liberty, promote equality and defend human rights. “Let us commit ourselves to defend those values, and protect our common civilization,” he concluded.