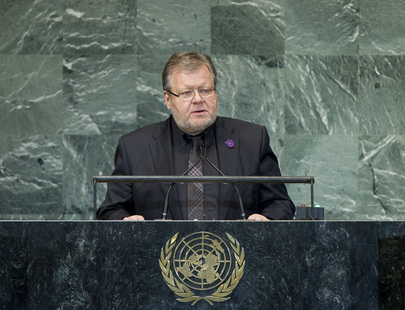 ÖSSUR SKARPHÉÐINSSON, Minister for Foreign Affairs and External Trade of Iceland, said the Parliament had unanimously voted to recognize Palestinian as an independent, sovereign State. Iceland had a good diplomatic relationship with Palestine. The United Nations had recently estimated that Gaza would no longer be “liveable” by 2020 unless urgent action was taken to improve the water supply, power, health and basic education. “The deplorable living conditions described in the United Nations report demonstrate only too well that the situation in Palestine is unacceptable to anyone who respects human dignity,” he said. “I have visited Gaza,” and met with fishermen who were not allowed to fish in the waters off Gaza and children whose lives had been made miserable by poverty, violence and a blockade that had been described as an open prison. He had seen how the human rights of people in the West Bank were violated every day by a man-made barrier that cut through their roads, schools and lives. Israelis wanted to live in peace, and so they deserved. The best way to ensure that was a two-State solution, which would benefit both the Israelis and the Palestinians. Reacting to the Israeli Prime Minister’s speech on Thursday, he said: “Don’t bomb Iran, not this year, not next year. Don’t start another war in the Middle East,” while calling on the Iranian President not to build a bomb. “Let diplomacy work, not rabblerousing or fear-mongering,” he said.

Democracy matured and only got better with time, and the Arab Spring was just the beginning, he said. As friends and supporters, he urged all to ensure the Arab Spring would advance the rights of all people, towards societies of democracy and social justice. The international community must unite to end the violence in Syria, seek a peaceful solution and ensure that those who committed atrocities would face their responsibility in an international court of law. The Syrian problem had been a wake-up call for the United Nations with regard to the Council. “We must reform it so as to make it a tool, not a hindrance, for progress in situations such as in Syria this year, or — as we saw last year — concerning the Palestinian application,” he said. He opposed violence and terrorism and called for unity in condemning the recent ghastly murder of the United States Ambassador to Libya.

Iceland was an open, embracing society, its foreign policy based on human rights, he said. It was unacceptable that anyone was mistreated or persecuted due to sexual orientation or gender identity. Iceland had demonstrated that small countries could be global pioneers through its move to introduce geothermal energy, a clean energy source, and by leading by example in the fight for gender equality. It was embarking on a pioneering clean energy programme for up to 150 million Africans. It had secured funds with the World Bank to help 13 African countries in the East Africa Rift Valley to identify, research and prepare considerable geothermal resources for use. That would be Iceland’s greatest, most historic cooperation project with developing countries. By developing geothermal energy in Africa, Iceland was also protecting the environment in the Arctic, where ice was melting at a far faster pace than ever anticipated.

Vast areas of the Arctic would soon open for new transport routes between continents and for oil and gas production, bringing immense commercial benefits. It would also endanger the fragile Arctic ecosystem and the traditional livelihood of the Arctic people. It was necessary to tread very carefully in the Arctic. It was in the interest of all nations to ensure the Arctic Council became strong enough to provide in the future the forum for shaping important decisions on common interests to all Arctic peoples. Turning to Iceland’s economic recession, he said the lesson from its recovery was that austerity did not work on its own. Iceland imposed austerity measures but it also raised taxes, especially on the wealthy, and used the revenue to stimulate growth and ensure the welfare system was intact. Today, Iceland had some of the lowest unemployment in Europe, and robust economic growth. “The Icelandic model works,” he said. While the global recession had led to a decline in international support for developing countries, Iceland was bucking that trend by increasing its support substantially.