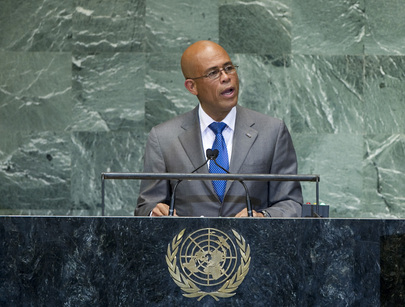 MICHEL JOSEPH MARTELLY, President of Haiti, thanking the Secretary-General for all his support for Haiti, said that small States in the United Nations were capable of playing a major role and contributing to peace, even in a slow economic climate. “The Haiti I love has been tried with ups and downs, with successes at times and with shortcomings at others,” he said.

He went on to say that often when circumstances were not good within a country’s borders, it turned to neighbours to “pick a fight”. He fully supported the peaceful settlement to international disputes, but emphatically stated that “it may be better to try to prevent them”. However, as long as access to water, large markets, and a healthy economy, among others, was not developed between countries and as long as differences were not respected, conflict would exist between nations.

Continuing, he pointed out that gender equality, democracy, equal treatment under the law, and respect for the environment, to name a few, were all parameters that prevent uncontrolled migration, climate change, religious wars, and ethnic conflicts. It was crucial to allow national dreams to emerge, offering the possibility to every man and woman regardless of colour, religion, or political stance to live in peace and raise their children in peace and dignity. The Haiti of De Toussaint Louverture understood those national dreams, but without development commitments followed by concrete steps, those dreams might not be actualized.

On the eve of Haiti’s presidency of the Caribbean Community (CARICOM), he said he had good faith that things would change because destinies of all countries were entwined. “The great ones can only remain so” if they supported the transformation of the international community without exclusion or exclusivity. It was necessary that dialogue prevail — “not this dialogue of the deaf” which the world had been enmeshed in for decades and which had brought conflicts and trouble to the world. There was no equality in the international community’s relations. “Every nation looks after its own interests,” he pointed out. Yet, the United Nations gave hope that things could be different. “We cannot let these hopes die,” he stressed.

He went on to say that in any family, especially in the United Nations, there could not be “great or small”, but “equal” where every State would be able to express themselves and seek relationships based on equality and the pursuit of happiness of all. The democratic framework was the process. Haiti understood that and on a national level had strengthened its own structures because “a real democracy produced stability”.

He then formally reiterated to the Assembly the need to “stop our fights” and to work together to reduce disasters throughout the world which hindered development and the economy. “Our respective countries have chosen us”, he stated, to create a world of peace. Echoing Victor Hugo at the 1847 Congress of Peace, he called for a day where there would be no battlefields, but marketplaces and minds open to ideas. “These are my wishes for the assembly of nations”, he said, calling for “a more beautiful and more just world”.