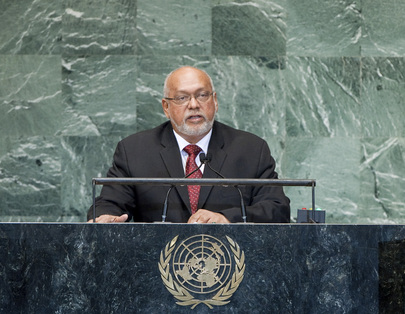 DONALD RABINDRANAUTH RAMOTAR, President of Guyana, said a “tide of change” was evident from local to global levels and was either being precipitated or accompanied by multiple crises within the global community. In the economic realm, continuing adverse conditions stymied global efforts at achieving internationally agreed upon development goals, with a sluggish recovery from the financial crisis compounded by a slowdown in output in major emerging economies. In view of that, developing countries had paid a heavy price, which was reflected in growth that was generally lower than pre-crisis levels.

Guyana had had to face many serious challenges, yet it had achieved an annual 5 per cent economic growth rate, which he believed was rooted in investing in people, with more than 30 per cent of the national budget dedicated to education, health, housing, water and social programmes. Even though Guyana had achieved universal primary education and had come a long way towards reaching the same in secondary schools, significant challenges remained in reaching people in remote areas, he said.

“If we are to encourage our youth to become responsible citizens and to prepare them to be the leaders of tomorrow, we must ensure that our education systems allow for the development of their full potential,” he said. Further, he said if the financial crisis continued it would have adverse effects on developing country growth, and it had already seen growing negative social problems, including drug and human trafficking, issues that needed a united approach to address.

Another area needing urgent attention was the climate crisis, he said, adding that global responses had not been fast or effective enough. “We cannot continue to deal with threats to the survival of the planet with such casualness,” he said. While some countries were taking those threats seriously, including Norway, the path was not without hurdles. While he applauded efforts at the Rio+20 conference and the sustainable development pledges made there, he said the plight of the poor was worsening, with food prices rising and droughts decimating crop yields. In line with the Five Rome Principles for Sustainable Global Food Security, Guyana called for an acceleration of the twin-track approach to enhance direct action against hunger for the most vulnerable, and for promoting medium- to long-term sustainability in agriculture and rural development.

The tide of democratic change that had swept the planet had raised people’s expectations for social progress and better standards of living in an environment of enlarged freedoms. Those aspirations deserved the respect and encouragement of Governments concerned and from the international community, he said. The United Nations must continue to pursue peaceful solutions to political conflicts, no matter how slow or painstaking the process may be. He urged warring parties in Syria to negotiate. He said the United Nations must persevere in finding a peaceful end to conflict in Syria, and concerning Israel and Palestine. He was encouraged by the efforts of Sudan and South Sudan to resolve their differences through negotiations and hoped Mali would be able to overcome its crisis. He also noted that his country stood firmly against the economic, financial and commercial embargo imposed on Cuba, and called for an immediate end to that policy.