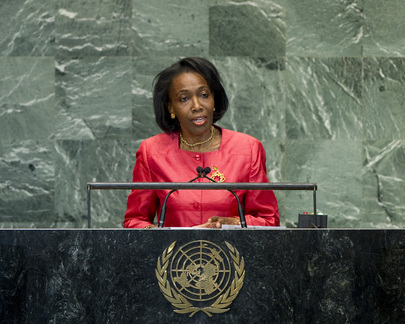 DESSIMA WILLIAMS ( Grenada) said her country’s ratification of the Rome Statute of the International Criminal Court in the past year had triggered the instrument’s entry into force. In April, Parliament had passed the End Violence against Women Legislative and Policy Reform and would continue its work on protecting women’s rights. As an “island of sustainability”, Grenada’s holistic policy framework was based on sustainable development, with its five development pillars being energy development, education, health and wellness, information and communications technology, tourism and hospitality, and agribusiness.

She said that despite having lost 204 per cent of its gross domestic product (GDP), as determined by the World Bank, due to destruction caused by Hurricane Ivan in 2004 and Hurricane Emily in 2005, the country had made great strides in recovery, with the generous help of its neighbours and partners. Also, despite decreased development efforts due to the loss of tourism revenues, port receipts and even remittances caused by the global financial crisis, Grenada remained focused on domestic improvement through the creation of relevant laws, as well as economic and social policies. The country would also co-host a meeting in the Caribbean with Sir Richard Branson to ensure the sustainable management of marine and coastal resources, she added.

Stressing that Grenada, the region and all small island developing States needed a far more supportive international policy and affordable financing for greater sustainability, she welcomed the decision to convene a third conference on the sustainable development of small Island developing States in 2014, and called for the international community’s support in designating 2014 as the International Year of Small Island Developing States in efforts to raise awareness of their special situation and mobilize international support for their sustainable development. On other matters, she called for a politically negotiated and urgent end to the situation in Syria, the creation of an independent Palestinian State, reform of the United Nations, the complete lifting of the embargo imposed on Cuba and continuing humanitarian contributions to Haiti.