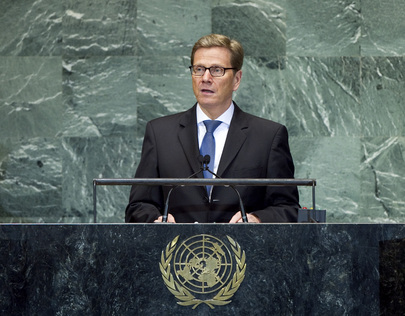 GUIDO WESTERWELLE, Minister for Foreign Affairs of Germany, said the forces of freedom and dignity, self-determination and hope for a better life were the driving forces behind the movement for change in the Arab world. “As Germans, we know from our own bitter experience: freedom is not a gift,” he said. Freedom had to be won and constantly defended. As a result of its experiences, Germany would always stand by those who, wherever they were in the world, called for freedom. However, he added, freedom had a “daughter” — called tolerance — and a “son” — known as respect. Freedom, therefore, did not mean freedom from responsibility. Rather, it always meant freedom to shoulder responsibility. He understood the many devout people who felt wounded by the shameful anti-Islam video that had surfaced in recent weeks. However, legitimate criticism and sincere indignation could not be used to justify acts of violence or destruction. While some said that the burning embassy buildings around the world were proof of a clash of civilizations, he continued, “we must not allow ourselves to be deluded by such arguments”. The vast majority of people opposed violence, and there was no clash of civilizations. The struggle was, in fact, between open and closed minds, between moderates and radicals, between understanding and hate. It was a clash between those who sought peace and those prepared to resort to violence. Germany had taken a stand in that struggle, and would not turn its back on the peoples of the Arab world.

In Syria, the United Nations Security Council had failed to live up to its responsibility, he said, strongly criticizing and calling for an end to that “deadlock”. Every day, the violence perpetrated by the al-Assad regime was escalating, and the risk of the conflict engulfing the entire region was growing. He supported the efforts of the Joint Special Representative, Lakhdar Brahimi, to find a political solution to the crisis. Meanwhile, at Germany’s initiative, this week, the Security Council had enhanced relations between the United Nations and the League of Arab States — an acknowledgment of its constitutional and positive role. In addition, Germany remained very concerned about the still unresolved dispute about Iran’s nuclear programme. In that regard, the “EU3+3” group of States had put forward proposals for a substantive negotiation process, and awaited a “serious response” from Iran. Israel’s security was at stake, as was stability in the whole region. He called on Iran to “stop playing for time”, as the situation was serious. At the same time, he added, those challenges must not lead to losing sight of the necessity of a negotiated peace between Israel and the Palestinians.

Many in the Assembly today were wondering whether Europe could successfully manage its sovereign debt crisis and whether it would continue to play a leading role in the world. “The answer is an emphatic ‘yes’, he stressed. The way out of the sovereign debt crisis was difficult, and required spending discipline, solidarity and growth. But Europe could continue down that road, and it would remain “a force to be reckoned with”. It was the world’s largest donor of development assistance, an inspiration for peaceful regional cooperation, a pioneer in climate action and disarmament, a champion of rule-based globalization and a driving force for United Nations reform. Finally, he said in that vein, Germany felt that the Security Council would be weakened if it failed to adapt to today’s world. He said, to that end, that Germany, India, Brazil and Japan were prepared to assume greater responsibility. A Council that did not have permanent seats for Latin America and Africa or only one for Asia did not reflect current and future realities.