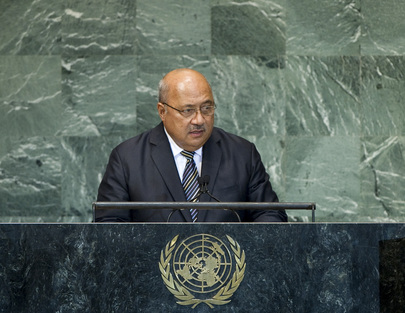 INOKE KUBUABOLA, Minister for Foreign Affairs and International Cooperation of Fiji, said that from January to April, his country had experienced the worst floods on record, which had inflicted immense human and economic costs, including a 33 per cent drop in tourism. “We feel particularly vulnerable”, he stressed, noting that the international failure to address climate change meant that all countries would experience more frequent and intense weather events, which would erode development gains and leave people feeling less secure. It was vital that disaster-risk reduction be integrated into global and national development strategies.

He went on to say that Fiji had undertaken comprehensive reforms that embraced the Millennium Development Goals, as seen in its introduction of standard pneumococcal and rota virus immunizations in efforts to minimize child mortality, making it the second country in the world to have done so. Moreover, it had taken the lead on broadband connectivity, as such technology was essential for improving education, medicine, agriculture and environmental services. It would help unite a dispersed people and the Government, by making it accessible and affordable, could help bring a “universe of wisdom” to the smallest schools and most remote villages.

On security matters, he said Fiji’s role in peacekeeping around the world went far beyond what was expected of a country of its size and level of development. It had contributed troops and police to Iraq, Liberia, South Sudan, Darfur and Timor-Leste. In the last year, Fiji had started contributing to the corrections and justice sectors of United Nations peacekeeping operations. Following elections earlier this year, the United Nations Integrated Mission in Timor-Leste (UNMIT) would be able to wind down its operations later in 2012, he said, adding that his country also worked through the Special Committee on Decolonization to ensure that New Caledonia’s right to self-determination, as expressed in the Noumea Accord, was faithfully implemented by all parties.

Fiji itself was working through a transition, he said. It was a kind of sustainable democracy based on the principle of “one person, one vote, one value”. A new constitution was being drafted, with citizens putting forward their views at public hearings throughout the country. Recommendations by the Constitutional Commission, created in March, would be reviewed by a Constituent Assembly in early 2013. That body would formulate the final document, he said, noting that preparations for the 2014 elections had begun, with electronic registration having been carried out in July and August. Half a million voters had been registered and throughout the process, Fiji had stayed true to the principle that Fijians must determine their own destiny.

After 40 years of strife and instability, the work of true and sustainable democracy was just beginning in Fiji, he said, asking the international community to support his country’s quest. Having redefined its world view, it had opened three embassies in 2011 — in Brazil, Indonesia and South Africa — and expanded its diplomatic presence this year with embassies opening in the Republic of Korea and the United Arab Emirates. The Constitution was expected to help build an environment that would promote safe working conditions, and labour laws were being reviewed to ensure compliance with the International Labour Organization’s (ILO) Convention 34. Fiji aspired to be a good global citizen, leading by example among island nations, and engaging with the international community in a spirit of constructive contribution, he said.