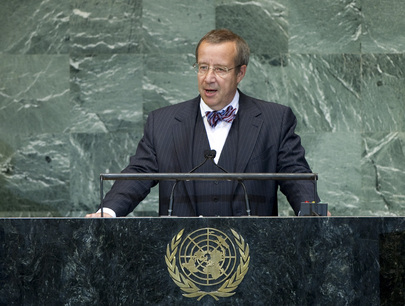 TOOMAS HENDRIK ILVES, President of Estonia, noted that recent years of economic and financial turbulence had demonstrated a strong correlation between economic prudence and responsibility in fiscal matters. Sustainability was not a term applied to development, but concerned all people, and responsibility and sustainability applied to human rights, good governance and development. Turning to the recent attack on diplomats in the Libyan city of Bengazi, he said, “Diplomacy is to prevent war, and when diplomats are attacked we are all less secure.”

On human rights, he said it was not enough merely “to keep your house in order.” As a conscientious member of the international community, Estonia felt the responsibility to do more globally. This included paying attention to human rights violations in places torn by conflict, as well as doing more to stop and prevent violations of the rights of women and children. It also meant making the most of new technologies in the service of fundamental rights and freedoms. Estonia looked forward to becoming a member of the Human Rights Council and to work proactively towards the fulfilment of its mandate.

He described the situation in Syria as “the complete breakdown of any semblance of the rule of law,” citing continuous extensive human rights and international humanitarian law abuses. It appeared that both sides — the Government and the rebels — had committed serious international crimes. The Security Council, especially its permanent members, must overcome their differences and find a solution to this bloodshed. The least that must be done by all parties was to allow for humanitarian aid to be safely delivered and to guarantee the security of those working to that end. The international criminal justice system, especially the International Criminal Court, played a crucial role in providing timely and decisive responses to such crimes. Investigations by the Court may deter further atrocities and prevent their escalation. Among civilians, women and children were the most vulnerable, he said, stressing the immediate need to take Security Council resolution 1325 (2000) on women, peace and security into account.

On governance, he expressed concerns about developments related to the Internet. Cybersecurity was vital to prevent oppressive Governments and criminals from wreaking havoc. It was not to prevent peaceful individuals from speaking their minds or gathering information and exchanging ideas. Despite having experienced extensive cyberattacks, his country was committed to an open, secure and reliable Internet, and it was imperative to ensure that the International Telecommunication Union’s new regulation did not lead to restricted Internet freedom and to unnecessary limits to the free flow of ideas and information. Estonia had signed up to the Open Government Partnership, alongside 42 other countries and was the first country to allow people to cast their vote online in parliamentary and municipal elections. E-government, e-school, e-medical prescription and e-parking were some examples of Estonian innovation.

Turning to the question of development and responsibility, “sustainable development is not a clichéd utopia, nor is it something forced on us from above,” he said. Burdening children and grandchildren with mountains of debt was immoral, as was living at the expense of others. Growth without responsibility was illusory. On Millennium Development Goals, he said “aiming high is the least we can do and there is no point in setting targets that we can be confident of achieving effortlessly”. Failure to achieve all the Millennium Development Goals should not be an excuse for not setting new targets. The world needed Sustainable Development Goals. “Let us aim high and do our best,” he said.