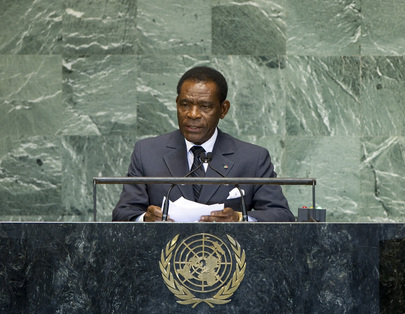 TEODORO OBIANG NGUEMA MBASOGO, President of Equatorial Guinea, said the general debate was taking place during turbulent times, characterized by a stagnant global economy, ongoing tensions, environmental degradation and natural disasters, requiring resolute, joint action by all stakeholders. Of all the problems facing the international community, none had been as debilitating as poverty and underdevelopment. Indeed, poverty, malnutrition and poor health care continued to take more lives worldwide each year than conflict and natural disasters combined. Moreover, the effects of poor education and lack of access to new technologies could actually end up being more detrimental to the future of humankind than terrorism or other ills.

In that light, he urged the Economic and Social Council to bolster its work on behalf of the least developed countries. That body, with the support of Member States, could play a major role in alleviating poverty and tackling all its attendant ills. Africa, he continued, was pressing ahead with its development efforts and Equatorial Guinea, in particular, was devoting a large share of its resources to improving infrastructure in sanitation, transportation and water. It was also enacting vital political reforms that would ensure broader civilian participation in decision-making. Those reforms were also setting term limits for political institutions and set the parameters for public-private activity.

To help the least developed countries cope with humanitarian challenges, he proposed the creation of a Food and Agriculture Organization (FAO) trust fund specifically devoted to ensuring food security in Africa. As an initial investment, his Government would provide some $30 million to such a fund and would urge other nations to do likewise. Turning to peace and security matters, he said respect and compliance with international commitments and respect for State sovereignty were crucial to ensuring stability and justice. No single country could seek to impose its will in international relations. Such actions would undermine the work of the United Nations.

As for reform of the Security Council, he joined the African consensus calling for two permanent seats on an expanded Council and five non-permanent seats. Africa was demanding its place in international relations so that it could play its rightful role in decision-making. Africa was also contributing to efforts to shift international relations from unilateralism towards multilateralism. He denounced selectivity in the application of international legal frameworks, especially in the area of nuclear energy. Moreover, sanctions and embargoes that targeted specific nations ran counter to the aims of the United Nations and undermined efforts to achieve the Millennium Development Goals. With all that in mind, he expressed the hope that the Assembly’s sixty-seventh session would become known as a milestone in the effort to humanize international relations.