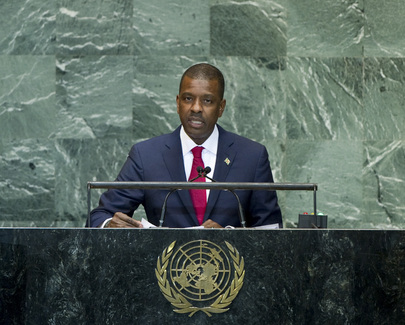 VINCE HENDERSON ( Dominica) said the Rio+20 Conference on Sustainable Development was a commendable effort by the international community to take stock of the human impact on the earth’s resources and to commit to reversing present trends. Although the outcome document, “The Future We Want”, fell short of Dominica’s expectations, it remained a work in progress and presented a useful platform for continued discussions on multilateral solutions to the growing concerns of sustainable development. As a small island developing State, Dominica was committed to the fundamental principle of environmental sustainability, he said, pointing out that his country was at the mercy of countries that promoted and employed unsustainable practices. Dominica was also committed to a multilateral approach to combating climate change, he said. Its impact continued to manifest itself in a number of ways, resulting in greater challenges to the survival of small island developing States. The failure to reach a legally-binding outcome on climate change was cause for grave concern, he continued, noting that while the debate continued, the challenges to his country were becoming greater. It was crucial to extend and amend the Kyoto Protocol before its expiration, he said. Low-carbon economies in small island developing States provided an opportunity to reduce greenhouse gas emissions while reducing dependence on imported fossil fuels. By generating their own energy from natural renewable sources, small islands would be able to achieve energy security, and the savings realized from the avoided cost of importing fossil fuels could be used for adaption and developmental needs. That was one of the reasons why the Small Island Developing States Sustainable Energy Initiative had been instituted, he said. It was intended to help them transform national energy sectors into catalysts for sustainable economic development and help generate financial resources to address adaptation to climate change. Dominica served as the Chair of the Initiative, he added. The recently concluded test-drilling in the Roseau Valley had confirmed that the nation’s geothermal resources had the potential to supply energy for domestic needs as well as for export, he said. That would allow the nation, in the next five years, to move away from importing fossil fuel for power generation while reducing the cost of electricity for its own people. By 2017, all its electricity needs would be met by a combination of hydro and geothermal sources. Dominica would not only be carbon-neutral, but carbon-negative by 2020, he said.