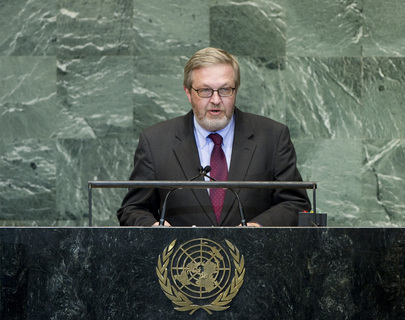 CARSTEN STAUR (DenmarK) said it was “smart economics” to focus on prevention rather than cure, whether addressing the global economic crisis, sustainable development or conflict. Turning first to sustainable development, he said Denmark strongly supported the Secretary-General’s “Sustainable Energy for All” initiative, noting that improved energy efficiency and increased use of renewable energy were essential for sustainable development. Expressing his Government’s strong support for human rights as a means to development, he welcomed today’s launch of the high-level task force for the International Conference on Population Development.

Denmark had surpassed the target of allocating 0.7 per cent of gross national income to official development assistance (ODA), he said, calling on others to do the same. Regarding conventional weapons, he said there was an urgent need for a universal and legally-binding arms trade treaty, calling again on the Democratic People’s Republic of Korea and Iran to comply with international law and the relevant Security Council resolutions. He welcomed the outcome of the high-level meeting on the rule of law, and called on all States to appoint national focal points to join the global network of National Focal Points for the responsibility to protect.

Turning to the situation in Syria, he condemned the violence and the massacres of civilians in the strongest terms, urging President Assad to step aside for a democratic transition. The Security Council should refer the case to the International Court of Justice, and further, agree on strong measures — including comprehensive sanctions — to enforce the six-point plan, he stressed. Noting, however, that “democracy does not happen overnight,” he said his country stood firm by its commitments in Libya, and emphasized that it was also time to reach final agreement in the Middle East peace process.