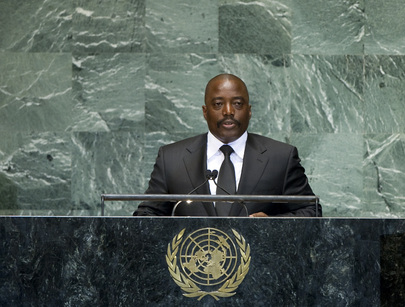 JOSEPH KABILA KABANGE, President of the Democratic Republic of the Congo, described the general debate as an opportunity for Member States to participate in collective reflection on efforts made for peace, security and development. The Assembly President had recommended that the debate focus on “the adjustment or settlement of international disputes or situations by peaceful means”, a wise choice and a relevant theme in light of the international community’s tireless search for peace through means other than force.

While history taught that such solutions were possible, dialogue must be based on truth, he said, stressing the need to guard against hasty action. More than 60 years after the creation of the United Nations, the world today still saw many wars, as well as instability. Terrorism was not decreasing, but increasing, with the Middle East a focus of attention. Syria was in bloodshed and Mali was plagued by separatism. Peace was more than the absence of war, he said, pointing out that numerous people were engaging in the trafficking of drugs and human beings and other violations, instead of working for prosperity. For the sake of two thirds of humanity, there was an urgent need to eradicate poverty, ignorance, violence, injustice and diseases such as HIV and malaria, he emphasized.

He said that after years of difficulty, his country was involved in the consolidation of peace and security. No effort had been spared, including the establishment of the rule of law. All efforts under way proved his Government’s commitment to peace and stability. But that momentum was now threatened by forces opposed to peace, he said. In North Kivu Province, where peace and stability, as well as reconciliation and human dignity, had begun to take hold, women, children and men were now subjected to inhuman acts, falling victim to profound evil and the philosophy of might. Children were stripped of the rights to attend school, he said. The situation was not acceptable and should be met with sanctions, he said, stressing the important role of the Security Council in that regard. “It is up to us to defend our country and law and order throughout the national territory”, he said, adding that the Government was mobilizing the necessary human and financial resources at the sacrifice of the nation’s emergence. “The Democratic Republic of the Congo is a safe investment”, he declared, urging bilateral and multilateral partners to continue investing in his country.