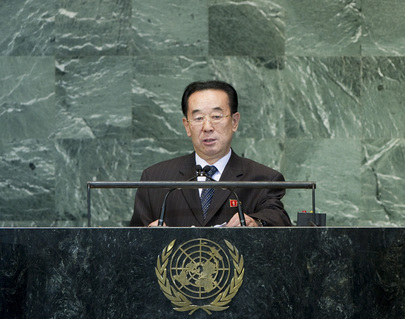 PAK KIL YON, Vice-Minister for Foreign Affairs of the Democratic People’s Republic of Korea, said Marshal Kim Jong-Un was firmly determined to help his people, who had overcome manifold hardships, enjoy a happy life to “their heart’s content in a prosperous socialist State”. The Supreme Leader’s independent foreign policy was opening a new chapter in relations with “other countries that are friendly” to the Democratic People’s Republic of Korea, not bound by the past. The people were following Mr. Kim with absolute trust and vigorously advancing to the final victory with full conviction in and optimism about the future, single-heartedly united behind him. “The most serious issue in the international arena at present is a flagrant violation of the principles of respect for sovereignty and equality,” he said. Unless the high-handedness and arbitrariness of certain countries was eliminated, it would be hard to say that the United Nations was playing its role as the centre for coordinating cooperative relations between States on the basis of sovereign equality, as enshrined in the United Nations Charter. The unjustifiable interference, pressure and use of force that violated Syria’s sovereignty and territorial integrity, as well as the Palestinian people’s right to self-determination and existence should be rejected, he emphasized. Stressing the need to democratize the United Nations and, in particular, to strengthen the authority of the General Assembly, he said that body’s resolutions on dismantling the so-called “United Nations Command” in the Republic of Korea, and on ending the United States blockade against Cuba, remained unimplemented. It was quite natural for the Assembly, which represented the general will of all Member States, to supervise its own overall activities, he said, adding that it should also be given the authority to undertake the final review of Security Council resolutions relating to peace and security, including those on sanctions and the use of force. Abuse of the Council as a tool for the pursuit of strategic interests by a handful of countries should never be overlooked, he said. He recalled that last April, the United States had taken issue with his country’s legitimate and peaceful space launch, and had forced the Council to adopt an unjust statement. That alone demonstrated abuse of the organ, he said. The United States had already finalized different “Korean War” scenarios and was waiting for a chance to implement them with a view to imposing military rule in his country after a military invasion, he continued. The United States was continually staging various joint military exercises under different code names in and around the Korean peninsula, driving the situation on the peninsula to the brink of war, he noted. Rubbing salt into the wounds of the people of the Democratic People’s Republic of Korea was the Republic of Korea, whose authorities had brought inter-Korean relations to “total bankruptcy”, he said, declaring: “History will bring them justice.”

The representative of the Democratic People’s Republic of Korea responded to the statement by his counterpart from the Republic of Korea regarding his country’s nuclear technology and human rights record by saying he totally rejected such allegations as “provocative”, having “no ground” and “distorting the truth”.  The origin of the nuclear issue on the Korean peninsula dated back to 1957, when the United States, the largest possessor of such armaments, had introduced the first nuclear weapon, he said.  It had not hesitated to increase the number of nuclear weapons on the peninsula to more than 1,000 in 1973.

He went on to describe how United States administrations, including the Bush Administration, had aggravated the situation by listing the Democratic People’s Republic of Korea, alongside Iran and Iraq, as targets for pre-emptive nuclear attack.  “North Korean people are living under the direct threat of nuclear weapons and blackmailing”, he said, adding that the joint military exercise conducted by the Republic of Korea and the United States already had “a war scenario”.  On human rights, he said his delegation “totally rejected” a United Nations resolution on that matter.  “The most serious violator of human rights is South Korea”, he said, citing that country’s “outdated” security law which provided “no guarantee of freedom”.