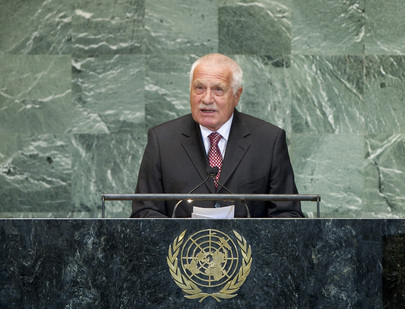 VÁCLAV KLAUS, President of the Czech Republic, said international disputes and conflicts could and should be settled by peaceful rather than military means, which had been demonstrated for a long time. During the emotionally straining and painful division of Czechoslovakia in the 1990s, peaceful means and diplomatic negotiations undertaken by domestic representatives had resulted in a settlement and a positive solution, he recalled. “Our experience confirms that it is in particular the domestic politicians who should be the driving force of talks rather than international negotiation teams or former political celebrities.” The mandate of negotiating parties must be rooted in domestic conditions and local traditions, and external observers must not succumb to the temptation of imposing a settlement that they themselves regard as being the right one.

“Those inevitable preconditions are often not met in various attempts at peaceful conflict resolution, and it is, therefore, no wonder that we often see the results opposite to what the architects of a particular settlement would have wished,” he said. “We have to ask ourselves: what is the success of peace talks and international missions?” he asked. “Do external interventions improve the situation or do they rather make it worse by hindering spontaneous processes that could reintroduce stability in the region, possibly with smaller sacrifices compared to the price paid by the external intervention? Are, for instance, the developments in Iraq, the still-open Cyprus issue or the independence of Kosovo a success of the United Nations or not?”

He said that the Czech Republic, as a country with fresh experience of a transition to democracy, wished Syria would take the same path, but added that he did not see a feasible solution at present. Immediate efforts must focus on helping the people affected by the current tragic situation. The Czech Republic had already sent humanitarian aid, set up a medical-evacuation programme for refugees, taken part in a United Nations observer mission and accepted a request from the United States for representation in diplomatic and consular matters in Syria, he said. What was needed now was a broader, longer-term perspective that identified what needed to be done tomorrow and the day after. “I am afraid that this is the most important lesson learned from the military intervention in Libya, which clearly demonstrated that a stable settlement cannot be sought by military force,” he noted.