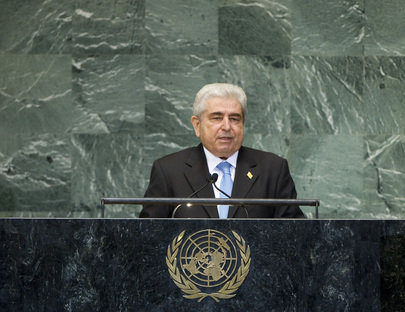 DEMETRIS CHRISTOFIAS, President of Cyprus, said that the sovereignty of people was and remained a fundamental principle of the Organization and the functioning of States. The international community should address the recent events in the Middle East and North Africa through that prism, respecting the right of each people to determine its own future. It was with great sadness, however, that the world was witnessing the loss of human lives. Increased violence in Syria continued and potential spill-over effects to neighbouring countries were a great cause of concern. Strongly condemning the violence and the massacres of innocent civilians in Syria and calling for their immediate cessation, he said that country was undoubtedly experiencing a humanitarian crisis. Cyprus stood ready to contribute to international efforts to manage that crisis, for the additional reason that the “fire is raging outside our door”.

In that context, however, the country remained committed to respecting the sovereignty and territorial integrity of Syria, and stressed the need for a political solution to the crisis. He joined with others in expressing unequivocal support for the newly appointed Special Envoy to Syria, Lakhdar Brahimi, and hoped that he would help bring about the conflict’s end. Against that backdrop, he said, the Middle East Peace Process continued to be at an impasse. It was imperative to resume negotiations, which would eventually lead to the implementation of a Security Council resolution and the establishment of a free and independent Palestinian State, based on the pre-1967 border. The solution must at the same time address the legitimate security concerns of Israel.

Cyprus was continuing to deal with the consequences of the 1974 Turkish invasion and subsequent occupation of more than one third of its territory, he continued. Turkey continued to violate the human rights and fundamental freedoms of tens of thousands of displaced persons, including the usurpation of their property. Since he assumed the Presidency of Cyprus in 2008, he had worked to end the stalemate and start a new process of direct negotiations with the then-Turkish Cypriot leader, Mehmet Ali Talat. However, since 2010, the new Turkish Cypriot leader, Derviş Eroğlu, had broken the commitment to continue talks and had retracted from all the convergences achieved with the previous leadership.

Last March, the Turkish Cypriot leadership had responded to the assumption of the Presidency of the Council of the European Union by Cyprus by leaving the negotiations. They demanded that artificial deadlines be applied to such talks, in contrast to what was agreed with the Secretary-General and the Security Council in its resolution 2026 (2011). Indeed, the process framed by that resolution was the only way that Cyprus intended to proceed, he continued. “Our commitment remains unchanged”, he said in that respect, adding, “negotiations must be carried out. They must continue.” He called on the other side to return to the table and continue the dialogue, urging them to “share our visions for a free, united Cyprus”.

To that end, the positive contribution of all parties was vital. Instead, however, Turkey had been pursuing “gunboat diplomacy” with its displays of its military strength in Cyprus. That alarming behaviour had been escalating since last September, when Cyprus had proceeded with exploration activities in its exclusive economic zone, within the rights accorded to it by international law and particularly by the United Nations Convention on the Law of the Sea of 1982. Turkey had not signed onto that Convention and did not abide by the relevant customary international law; moreover, it had neither claimed an exclusive economic zone nor concluded an agreement delimitating its exclusive economic zone in the eastern Mediterranean. Further, it had not pursued an agreement on the delimitation of its maritime boundaries with Cyprus. To the contrary, Turkey undertook unilateral actions in respect of sea areas that were patently beyond any reasonable geographic or legal limits of its own continental shelf and potential exclusive economic zone, and clearly falling within the exclusive economic zone and continental shelf of Cyprus. He called on Turkey to cease its provocative behaviour.