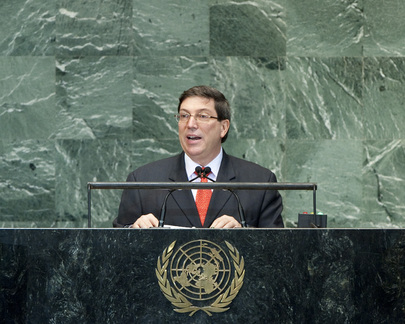 BRUNO RODRIGUEZ PARILLA, Minister for Foreign Affairs of Cuba, said the so-called “ Summit of the Americas” held last April in Cartagena once again excluded Cuba because of United States imposition. Argentine sovereignty over the Malvinas islands, which Cuba supported, and the lifting of the blockade against Cuba were the focus of the Summit’s declaration. That showed that “Our America”, as envisaged by Simon Bolivar, had entered a new era. Latin America and the Caribbean had changed and it was determined to contribute more to the “equilibrium of the world”. But, United States policy towards the region remained the same. The United States continued the same security approach and military deployment, rather than a democratic, mutually beneficial relationship between equal, sovereign States. NATO continued to view Latin America as on the periphery of Europe and the Atlantic and a place in which it could intervene to secure interests, even if illegitimate.

The elections in Venezuela would be decisive for the region’s common destiny, he said. He expressed full support for the Venezuelan people and their President in the face of “destabilizing attempts”. Cuba had always contributed to peace in Colombia. It supported the exploratory talks held this year in Havana and it would provide a venue for the upcoming dialogue between the Colombian Government and the Revolutionary Armed Forces of Colombia. He also supported the bid for Puerto Rico’s independence. Today’s world did not resemble the one envisaged by the drafters of the United Nations Charter. Right now, regime change was being imposed from Washington and other NATO member countries’ capitals. The United States and some European Governments had decided to overthrow the Syrian Government and they had armed, financed and trained opposition groups, and resorted to using mercenaries. Due mainly to firm opposition from the Russian Federation and China, it had been impossible to manipulate the Council to impose the interventionist formula used in recent warmongering adventures.

He reaffirmed the Syrians’ rights to self-determination and sovereignty without foreign interference. Violence, massacres and terrorist acts must cease, as must media manipulation and the arms and money trafficked to the insurgents. The Assembly must promote a peaceful solution and prevent foreign intervention, which would have serious consequences for the region. Also, the Assembly should act with resolve and recognize the Palestinian State, based on 1967 borders, as a full United Nations member. It should do so now, with or without the Council’s consent or peace negotiations. Further, the global economic crisis had called for a rethinking of the current global economic relations system, which served only to pillage under-developed countries. The United Nations must be reformed profoundly, to put it at service of all nations and end the double standards of a handful of industrialized, powerful countries. The Assembly’s key role should be restored and the Council should be made democratic, transparent and truly representative.

The Summit of the Non-Aligned Countries held in Iran reaffirmed the Non-Aligned Movement’s position in defence of peace, independence, sovereign equality of States, the right to development, sovereignty of natural resources, full disarmament, particularly nuclear disarmament, and the right to the peaceful use of energy, he said, fully supporting the Movement. On another issue, he said that on 31 July 2011, the United States State Department included Cuba on an arbitrary, unilateral list of States that sponsored international terrorism. But, the real reason was that the United States wanted to justify its blockade of Cuba. He strongly rejected the use of such a sensitive issue as terrorism to pursue political goals and called on the United States to “stop lying and put an end to this shameful exercise which is an outrage against the Cuban people and the international community”, as well as a way to discredit the struggle against terrorism.