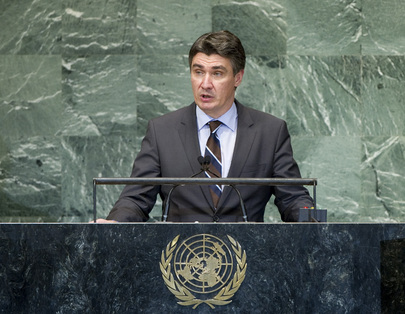 ZORAN MILANOVIĆ, Prime Minister of Croatia, said his country strongly supported the United Nations as a beacon of multilateralism providing the only universal framework for finding common solutions to international crises and challenges. “But we have to ask ourselves: has the United Nations done enough and what can we do collectively to improve its performance?” If each country became more democratic, more developed, better run, more stable and more responsible, “our combined strength will rise exponentially”, he said. Resolving international disputes was at the very heart of the United Nations, which had been created to prevent war and keep the peace through its valuable tools of preventive diplomacy and mediation.

“We have done it ourselves”, he continued, referring to his country’s settlement of its border dispute with Slovenia. However, not everyone respected peace and international law, and this year was unfortunate in terms of United Nations efficiency concerning conflict-prevention, mediation and protection of civilians. The lack of unequivocal action against the most severe violations of the United Nations Charter was deeply troubling, he said, strongly condemning the recent killing of the United States Ambassador to Libya. He added that prompt action in Syria should help to end the violence and lead to a Syrian-led political transition that would meet the people’s aspirations. “There is no peace without justice”, he said, expressing support for the rule of law and the work of the International Criminal Court.

“Undoubtedly there are sufficient conflict-prevention tools at our disposal; the question remains whether we can muster enough resolve to use them,” he continued. Syria was the most recent and most striking proof of the need for a greater role for preventive diplomacy and mediation efforts in the early phase of a conflict, he said, emphasizing that timely prevention was crucial for successful conflict resolution. The prevailing global crises and the effects of globalization contributed to the rise of popular distrust in the capability of political leaders to produce solutions, he said, pointing out, however, that his country had undergone an extensive but successful political, economic and social transition in a fairly short period.

As Vice-Chair of the Peacebuilding Commission, Croatia stood ready to assume its responsibility for creating improved structures, he said, noting that further development of the Human Rights Council’s capacity was of utmost importance. Croatia had been successful in its post-conflict transition and stood ready to join the European Union next year, he continued, adding that the country was also preparing to become an active participant in United Nations peacekeeping operations. Among other commitments, Croatia supported efforts to stabilize Afghanistan and improve the lives of its people. “We built a stronger State so we can play a more substantive role in the world’s affairs,” he said. “We stand ready to share our experiences and contribute constructively to the reforms in neighbouring countries, based on democracy and European values.” He added: “Our vision is not just a region devoid of war. We strive to achieve genuine political, societal and economic development.”