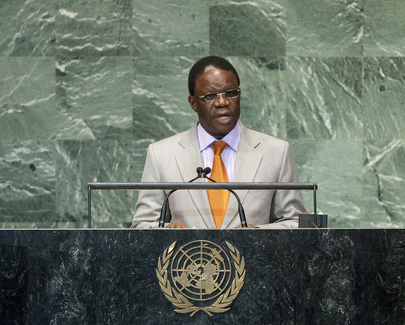 BASILE IKOUEBE, Minister for Foreign Affairs and Cooperation of Congo, stressed that the persistence and resurgence of crisis “flashpoints” all over the world “mortgaged the promotion and protection of human rights”, as well as attempts at development. In that context, Congo welcomed the choice of theme for the Assembly’s sixty-seventh session, which truly addressed the concerns of the hour. Congo, having been mired in conflict during the 1990s, had made the choice of mediation and dialogue, he said. It had overcome socio-political turbulence, and the resulting peace had opened up a space for the nation to evolve its democracy and economic development. Congo expressed its deep concern with the ongoing crises that threatened the peace and security of the region, in particular the Sahel, which was subject to ever worsening instability. The Democratic Republic of the Congo was also undergoing a serious conflict in its eastern region, with the emergence of armed groups such as the “M23”; the political, security and humanitarian effects of that conflict extended to the entire Great Lakes region. He welcomed, in that respect, the recent initiative of the Secretary-General to convene a high-level meeting on the situation in the Democratic Republic of the Congo, on 27 September. Congo hoped to see a concrete solution to that situation as soon as possible.

The collapse of democracy in Mali was a regression that Congo deplored, he said, calling for a return to constitutional order in that State. The risks of the contagion of terrorism, in particular, called for the support of the Economic Community of West African States (ECOWAS) and the international community, so that the “dangerous precedent” established in Mali would not happen again elsewhere. He further welcomed positive developments in the process established between the African Union and Somalia, as well as the election of that country’s new president, Hassan Sheikh Mohamud. Of course, there were still great challenges to building a State with the rule of law; Somalia must be assisted in building on the gains of the last few months, and the international community should take an “organized and consistent” approach in that regard. With regard to the conflict between Sudan and South Sudan, he called on both parties to exhibit political will and to sign all comprehensive agreements as called for by the African Union.

Turning to the Middle East, and in particular to the conflict in Syria, he stressed that the world community must not allow the “Arab spring” to bloom “to the detriment of the interests of a people who have the right, like any other, to live in peace in a viable State”. As the situation in Syria confronted the region as a whole with the risk of destabilization, he called for an agreed settlement which took into account the needs of the various parties to the conflict. In addition, it was necessary for nuclear-weapons States to implement measures aimed at real nuclear disarmament, and ensuring that the ban on nuclear proliferation for military purposes. He defended, nonetheless, the right of States to develop nuclear materials for peaceful purposes under the control of the International Atomic Energy Agency (IAEA).

Regarding development, he noted that agreements by major industrialized States were not being complied with. He was concerned about the crisis of the Euro zone, and in particular its effect on commitments that had been made to achieve the Millennium Development Goals. In that context, he underscored the role of the United Nations to forge a “spirit of solidarity and cooperation” in order to ensure respect for development cooperation commitments. Finally, he said, the reform of the Security Council must continue to be a priority concern on the agenda, and he called for the broader competence of the Economic and Social Council, as well as the establishment of an international mechanism aimed at the protection and promotion of sustainable development.