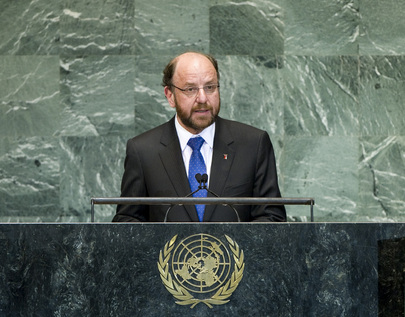 ALFREDO MORENO CHARME, Minister for Foreign Affairs of Chile, said the Arab Spring had channelled the legitimate democratic aspirations of the Arab people. He called on all parties, particularly the Syrian Government, to immediately cease violence and to engage in dialogue toward a peaceful solution. He rejected the intolerance that had spurred violence in the region. Nothing justified the criminal act committed against United States diplomats in Libya. Further, Chile recognized the Palestinian State and supported its bid to become a United Nations Member State and its right to be independent. Israel also had the right to safe borders. Despite their differences, Latin American countries had learned to live with each others’ cultures and forms of Government, and had been able to use dialogue to reach consensus on various issues. Mutual respect and understanding guided Chile’s foreign policy. The global community must help countries emerging from crisis, and support their internal reconciliation processes and socioeconomic development. A stronger development component to aid Haiti’s recovery must offset the requisite changes to the composition and size of the United Nations Stabilization Mission in Haiti (MINUSTAH).

The Security Council must be reformed to become more representative and democratic. He supported expanding the number of non-permanent and permanent seats and making its working methods more transparent. He objected to the veto power, and said it should never be used when addressing crimes against humanity, genocide and ethnic cleansing. Nations must set aside national ideologies. Chile had submitted its candidature for the Council during the 2014-2015 period. If elected, it would contribute its own foreign policy, as well as a Latin American and Caribbean perspective. Chile was firmly committed to the rule of law and to providing support for vulnerable sectors. It supported strengthening of the human rights treaty system, as well as the work of the High Commissioner for Human Rights.

Latin America’s past experience with addressing a fiscal crisis had taught it that Governments must act responsibly and control public spending. Protectionism was inefficient, he said. It undermined productivity, eliminated competition and prevented real development. He advocated free trade as a way to fuel economic growth. Chile had free-trade arrangements with more than 60 countries. At 1 per cent, its average tariffs were the eighth lowest in the world. Thanks to brisk annual growth of 6 per cent on average in the last two years, Chile had reduced extreme poverty and unemployment. Chile had joined Peru, Mexico and Colombia in a free-trade alliance with Pacific rim countries. Thanks to generous outside aid, Chile had recovered from the massive earthquake that rocked the country two years ago. By end of the Chilean President’s current mandate, all material damage would be fully recovered. He called for global solidarity to address the repercussions of the increasing number of natural disasters worldwide, noting that outside support had helped rescue the 33 miners trapped in the San Jose mine in 2010.

Nations must act responsibly to preserve the environment, implement sustainable development goals and meet clean energy objectives, he said. He supported Argentina’s legitimate claims over the Malvinas, South Georgia and South Sandwich islands and called for the resumption of talks between that country and the United Kingdom. As for the United States blockade on Cuba, it must end. Also, he categorically rejected the charges against Chile made by Bolivia’s President on Wednesday during the General Assembly. There were no outstanding border problems between Chile and Bolivia. Chilean-Bolivian border arrangements were clearly spelled out in their 1904 Treaty, to which Chile had dutifully complied. Bolivia’s 2009 Constitution introduced provisions that contravened international law; therefore, they were unenforceable. As a commission of jurists appointed by the Society of Nations in 1921 and the most recent General Assembly of the Organization of American States held in Cochabamba had stated, the issue was a strictly bilateral matter. Chile had readily expressed its desire to engage in dialogue with Bolivia over the existing agreements. It was up to Bolivia to accept that invitation.

The representative of Chile responded by saying his country respected international law and sovereign equality, and had cooperated with the human rights system.  He added that he could not allow the general debate to be used as a pretext to distort the manner in which his country’s relationship with Bolivia had been framed.  Unilateral benefits had been granted to Bolivia, he said, recalling that the OAS General Assembly had reiterated in 2011 that the dispute was not to be addressed in an international organization, nor was it based on resolutions that had been offset by recent developments.  It had also underlined the bilateral nature of the matter.

He went on to say that in 2011, the President of Chile had given an overview of the dialogue, expressing confidence that the process would end successfully.  On that same day, negotiations had been interrupted when Bolivia had stated that it would bring its maritime claims into legal channels.  Chile had reaffirmed its commitment to the rule of law at the international level, he said.  It was in compliance with all treaties and agreements on peaceful coexistence, and hoped Bolivia would return to the bilateral approach.

The representative of Chile said Bolivia had a distorted vision of history, as the 1904 Treaty had been signed 20 years after another treaty.  It was not Chile that had called off dialogue, he said, adding:  “Quite the contrary.”  Chile continued to appeal to Bolivia for understanding.  To Bolivia’s statement that Chile had not complied with the 1904 Treaty, he said the railway to which his Bolivian counterpart had referred had been destroyed after being operated by a Bolivian company and contaminated by mineral transport.  Bolivia had invested thousands to ensure that it would become operative this year, while the country’s President had said with pride that national cash reserves had reached $13 billion.  Much of that increase was due to Bolivia’s trade through Chilean ports, which was based on the 1904 Treaty, he said, adding that the neighbouring country used facilities provided to it for the sake of free transit.