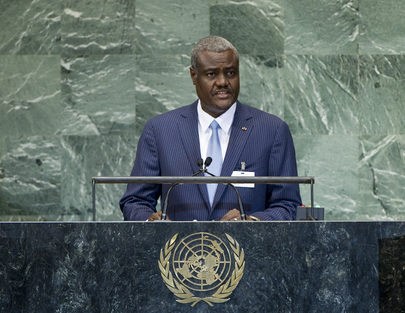 MOUSSA FAKI MAHAMAT, Minister for Foreign Affairs and African Integration of Chad, said the world was in an unprecedented period of tension, perhaps the most serious since the cold war.  From Afghanistan to Mali, from Libya to Syria, from the Palestinian crisis to Sudan and South Sudan, the current crises had considerable religious and cultural undertones that were difficult to address.  “Africa crystallizes all these scourges,” he said, citing in particular the situations in Mali, the Democratic Republic of Congo and Sudan-South Sudan, where attempts to resolve disputes had failed.  The international community — and the United Nations in particular — had an obligation to establish peace by using all the available tools and mechanisms for resolving conflict.  There was a need to ponder the “form and effectiveness” of United Nations involvement in many conflicts around the world, he stressed.

Describing the crisis in Mali as mired in violent extremism and the trafficking of drugs, he asked whether the world could afford to remain inactive, given that the “disease” might spread across the Sahel region.  Recalling the recent high-level meeting on the Sahel organized by the Secretary-General, he commended the commitments made by France, ECOWAS and Mali itself to eradicate the “gangrene”.  For its part, the United Nations should speed up its efforts to pass a resolution authorizing an international military force in Mali, he emphasized.  Within the framework of subregional initiatives, he said, members of the Community of Sahel-Saharan Stateshad undertaken a regional reform which would incorporate the dimensions of the rule of law, and a meeting would be held in N’Djamena in November to adopt a revised text to that effect.

He said his country was drawing lessons from the difficulties that the United Nations had previously faced in Chad, recalling that the Government had requested the departure of the United Nations Mission in Central African Republic and Chad (MINURCAT) several years ago.  Despite a huge budget and many resources, the Mission had not proven to be an effective deterrent of conflict, and had left the bulk of its work to a national force of 600 Chadian men and women, he recalled.  Additionally, after the Mission’s departure, Chad had decided to authorize a force to support internally displaced persons, and requested international support.  To date, the assistance requested, estimated at $4 million per year, was still not forthcoming, he said.  Reiterating a special appeal launched last year, he asked the international community to reconsider and address that issue.

“ Africa greatly needs international solidarity”, not only to address the crises sweeping through it but in its development, he stressed.  The Millennium Development Goals had only been partially met or not at all.  Poverty, unemployment and despair pushed young Africans into extremism or led them to seek opportunities elsewhere around the world.  African States must create enabling conditions for development and prosperity, he said, adding that Chad was continuing the necessary political reforms to that end.  For the first time, the country was a candidate for a non-permanent seat on the Security Council during its 2013 elections, he said, calling for that body’s expansion and a permanent seat for Africa with the right of veto.