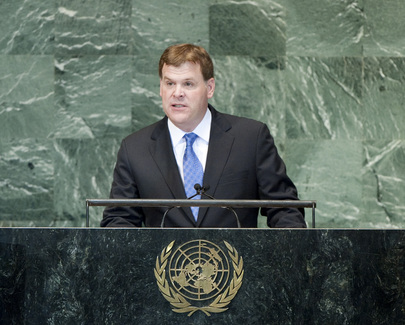 JOHN BAIRD, Minister of Foreign Affairs of Canada, said the General Assembly was now two-thirds of a century old, during which time the world had seen great achievements and grave injustices. There had been powerful progress — the launch of humans into orbit and mapping of the human genome, and deep development with the largest terror attack ever here in New York and the failure to prevent genocide in Cambodia and Rwanda. Some events had been predictable, others not, and the only constant was change. Amid such flux, it was all the more important to focus on fixed principles and chart a course towards immutable goals: prosperity, security and dignity. People would judge success by how well States furthered those ends.

On trade, he said it was no longer necessary to endlessly debate how to make people better off. “There is no special alchemy required”, he said, urging free trade among open societies and under transparent, consistent and fair rules. The fight for economic and social development had been seen in the struggle for open markets, societies and minds. The well-being of Canadians depended on openness at home, and with the world. “We must be a trading nation”, he said, noting Canada was expanding trade at a rate of unparalleled ambition. There was no fundamental conflict between national security and the open society: both sought to protect the same values, rights and freedoms.

Turning to Syria, he said the crisis in that country had tested the United Nations’ ability to achieve results. “Until the last syllable of recorded time, the world will remember and history will judge Member States that are allowing the atrocities to continue,” he said. People around the world could not understand why the United Nations had been unable to take concrete steps. He called on Syria to ensure that its stockpile of chemical weapons remained secure against the possible use or proliferation by “those who would do evil”, saying Canada stood ready to assist neighbouring States in taking measures to reduce the threat of those weapons. Reiterating the call for an immediate end to the violence, he said President Assad must be replaced by a new order that protected Syria’s territorial integrity and respected all religious minorities.

But, it was the Iranian regime, he said, that represented the most significant threat to global peace and security. A nuclear Iran would embolden an already reckless regime. Canada had listed Iran as a State sponsor of terrorism and suspended diplomatic relations with that country. He was clear in saying that Canada’s quarrel was with the regime, not the people, and urged Iran to comply with its international nuclear obligations and to cease enrichment activities. He also encouraged Iran to look to its neighbours, some of whom Canada had supported in building peaceful-purpose nuclear energy programmes.

He went on to stress that the human rights abuses that did not threaten security were still a concern, whether the “notorious” political prisons in the Democratic People’s Republic of Korea, forcible recruitment by the “M23” group in the Democratic Republic of the Congo, or the forced marriage of young girls. Wherever they occurred, assaults on human dignity were unacceptable. No one said it would be easy to advance prosperity and dignity. “It is not easy”, he said. “But it is essential”. Despite the setbacks and heavy price, Canada understood that nations and peoples were up to the challenge.