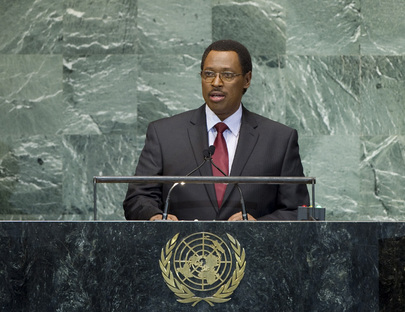 THÉRENCE SINUNGURUZA, Vice-President of Burundi, said his country was in the process of recovery and its people were again finding faith in their destiny. Burundi had organized democratic elections in 2005 and 2010, and had established democratic institutions — including the National Assembly and the Senate — that were largely representative of the population and respected the need for an ethnic and gender balance. The parity in male-female representation in the Senate demonstrated the Government’s efforts to fairly represent women, who made up most of the population, in State institutions, he said.

He said the Government had also created the National Independent Commission on Human Rights and initiated the office of Ombudsman, charged with implementing a zero-tolerance policy in the fight against corruption and embezzlement. In October 2011, it had adopted the National Strategy on Good Governance and the Fight against Corruption for 2011-2015. As a result, high-level Government officials had signed performance contracts, laying the foundation for a culture of accountability. On the basis of those contracts, officials would undergo periodic evaluation, and those meeting the performance criteria would be encouraged while those who did not would be replaced. To create an effective transitional judiciary, the Government had also created the Truth and Reconciliation Commission, he added.

On the social arena, he said a free education programme had been implemented to allow the enrolment of many children in primary school. Free medical assistance, for pregnant women and children up to the age of 5 years, had improved maternal and children’s health, which would help bring Burundi closer to achieving the Millennium Development Goals. Additionally, 2,024 schools, 80 health centres and more than 2,000 drinking-water fountains had been built over the last three years, and Burundi continued its efforts to improve its economic infrastructure, public financial management and business climate. Significant progress had also been made on the return of displaced persons and refugees, he said. Security was a prerequisite for social and economic progress, he said, emphasizing Burundi’s commitment to pursuing reform in that regard so as to ensure professionalism in the security forces and prison services.

He said an interministerial committee had been formed to develop a national strategy on regional integration, and Burundi was organizing a conference for development partners, to be held in Geneva next month. As for international affairs, Burundi had been one of two countries in the world to participate in the initial African Union Mission in Somalia (AMISOM). Expressing support for the recent adoption of that country’s provisional Constitution, he said the election of a new President was another significant step towards peace and national reconciliation there. Burundi would deploy more than 200 police officers to help maintain security and help to form the Somali police force, he added. Concerning Mali, it was to be hoped that the interim Government would soon find a solution to the crisis dividing that country.

As for Syria, Burundi hoped for a prompt restoration of peace in the country, with the concerted efforts of all parties involved, as well as the international community, he said. Concerning the Democratic Republic of the Congo, he affirmed his country’s commitment, alongside other members of the International Conference on the Great Lakes Region, to the terms of the Organizational Protocol on Security, Stability and Development, as well as to the declaration signed by Heads of State and Government in July 2012 and August-September 2012. Burundi remained committed to seeking creative solutions in that conflict through existing regional mechanisms and in line with the decisions already taken by countries of the subregion, he said.