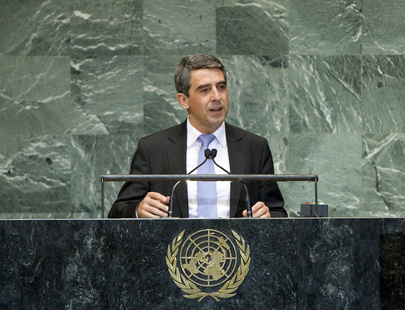 ROSSEN PLEVNELIEV, President of Bulgaria, said that unfortunately the historic transformations in politics and technology being witnessed by the world did not always bring peace and stability and in many situations human suffering and destruction still occurred. For that reason, the main theme of the General Debate, the peaceful settlement of disputes, could not be more relevant. Mediation and good offices should be a tool of preference to deal with escalating tension. Noting that a few weeks ago, at the Sofia Synagogue, tribute was paid to the memory of the five Israelis and one Bulgarian killed in an attack on tourists last July, he stressed that delivering justice was vital for addressing terrorism, which he called “one of the ugliest and most despicable crimes against humanity”, which had no justification and which his country would spare no effort in countering. He also condemned violent acts committed recently in the name of defending religious beliefs, urging all involved to show tolerance and avoid provocative actions.

In Syria as well, he condemned what he called gross violations of basic United Nations principles, calling for full accountability from the perpetrators, including through the International Criminal Court. Supporting the actions of the European Union in providing humanitarian assistance, he called for the start of a transition towards a democratic State that included all ethnicities, noting that his country had supported opposition groups in their efforts to unite over a democratic alternative to the current regime. Welcoming steps made towards democratic reform in the context of the so-called Arab Spring, he said that the reactivation of the Middle East Peace process was needed now more than ever and looked forward to the resumption of direct negotiations, expecting both parties to demonstrate continued commitment to a peaceful settlement that respected the legitimate interests and sensitivities of the Israeli and Palestinian peoples, based on the two-State solution.

In the area of disarmament and non-proliferation, he called for the continued strengthening of the Nuclear Non-Proliferation Treaty (NPT) and other major instruments, such as the Chemical Weapons Convention, and supported the negotiation process leading to the adoption of a legally-binding and robust Arms Trade Treaty. He said that Iran’s full cooperation with the International Atomic Energy Agency (IAEA) was of “paramount importance”, looking forward to resumed high-level negotiations and concrete confidence-building steps.

Expressing support for the role of the Human Rights Council, he announced that his country would be seeking, for the first time, election to that body for the period 2019 to 2021. He said his country had gone through a successful transition from totalitarian rule to a functioning democracy over the past two decades, adding that its greatest achievement was preserving the long-standing tradition of tolerance and dialogue between ethnic communities and noting the coexistence of houses of worship of Islam, Judaism and Catholic and Orthodox Christianity in his capital city, amidst archaeological monuments of several ancient civilizations. In that light, over a year ago Bulgaria initiated an international forum called the “Sofia Platform”, providing a venue for dialogue between all segments of societies focussed on the transition processes in Central and Eastern Europe, the Balkans and the Middle East. Affirming the value of reform and cooperation processes leading to enlargement of the membership of the European Union, he expressed support for greater subregional cooperation in south-eastern Europe through the best use of existing bodies.

Affirming also the importance of the Rio+20 outcome, he called for effective follow-up through the General Assembly, particularly on the formulation of Sustainable Development Goals, recognizing an important role for the Economic and Social Council in that process and pledging readiness to contribute as a current member of the latter body. He stressed that his country was deeply committed to the implementation of the Millennium Development Goals and was working to gradually increase its share as a donor of development and humanitarian aid to meet its commitments. During the Assembly session, it would sign the Food Assistance Convention. He expressed high appreciation for the Education First initiative of the Secretary-General, advocated for the re-election of Irina Bokova as the head of the United Nations Educational, Scientific and Cultural Organization (UNESCO) for another term and described a growing partnership between his country and the United Nations Children’s Fund (UNICEF). Finally, he affirmed full support for building a stronger rule-based multilateral system with the United Nations at its centre.