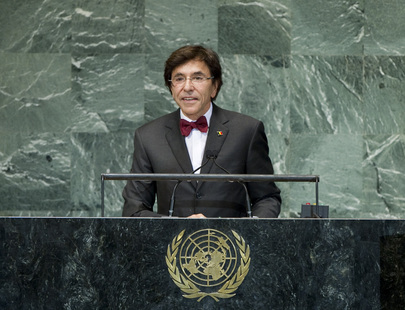 ELIO DI RUPO, Prime Minister of Belgium, said his country was a founding member of the European Union and its capital, Brussels, was the cultural capital of the region. NATO was also headquartered in the city. Reminding the Assembly that 2014 would mark the 100th year of the start of the First World War, he said, it was “our duty to pay tribute to those who defended the ideals of peace”. Belgium would host the World Outgames in 2013 and was a candidate for hosting an international exposition in 2017. Those events have one objective, namely, to bring humanity together.

He stressed the value of human rights, including the right to a fair trial, the rights of women, refugees, and persons with disabilities, and the right to be free of all forms of discrimination. Belgium, alongside Slovenia, had proposed a resolution on eliminating racial discrimination; that initiative deserved the fullest support. Women must be equal to men at political, social and economic levels. Violence against women must be addressed systematically. In Belgium, women currently held office in the Ministries of Justice, Interior and Police. Any discrimination, be it based on gender, disability, age or sexual orientation was unacceptable. His country took pride in allowing same-sex marriage and welcomed the initiative of the United Nations Educational, Scientific and Cultural Organization (UNESCO) on homophobia.

Belgium supported efforts to strengthen the rule of law worldwide because it was convinced that it was essential to development, prosperity and a better world, he said. The aim was to make it possible for every one to live peacefully and to flourish. His delegation had responded to the Secretary-General’s specific measures regarding the rule of law and human rights, pledging his Government’s active cooperation. The International Criminal Court could contribute to “the advent of the era of responsibility”.

On development, he said, the world of finance had its own logic. Noting that computer traders were much faster than human traders, he stressed the need to monitor the financial world and the need for deep reform of the banking sector. Expressing support for the Secretary-General’s Sustainable Energy for All Initiative, he said, “We have to break the logic that devours natural resources”.

Of particular concern to his Government was the security of the Great Lakes region, he said. The activity of M23 mutineers in the Democratic Republic of the Congo had dramatic impacts on the local population. Images of massacre, rape, child soldiers, looting, internally displaced people were deplorable and unacceptable, and efforts must be intensified to put an end to the rebellion. The root causes of the conflict must be addressed. At the same time, the territorial integrity of the Democratic Republic of the Congo must be respected and any foreign support to rebels must stop. “ Belgium calls for reason to prevail”, he said, underlining his Government’s readiness to assist in the country’s restoration.

Turning to Syria, he said he was outraged by the attitude of the Syrian regime to its own people. Some 30,000 people had been killed and the number of refugees had reached 250,000, but there been no agreement to stop the massacre. Crimes against humanity were being committed. Belgium supported Mr. Brahimi’s appointment, but felt one thing was clear: Bashar al-Assad must go. He had lost all legitimacy. Humanitarian assistance was high priority, and it was urgent that hospital staff and other humanitarian workers be allowed to carry out their mandate. China and the Russian Federation could join in efforts to attain that objective. On the Israeli-Palestine issue, he called on both sides to find a solution to “coexist in peace, security and prosperity”.