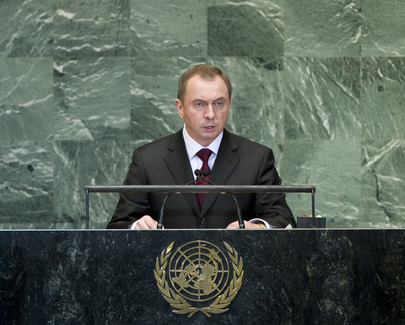 VLADIMIR MAKEI, Minister for Foreign Affairs of Belarus, said that while many often recalled “the spirit of San Francisco”, it was important to consider seriously whether the hopes expressed in the world body’s founding city had been realized. “To some extent, they have,” he said. “After all, there is no longer the sharp ideological confrontation that characterized the twenty-first century. There was no longer open conflict between the major world Powers, as there had been in previous centuries. Yet, the spirit of San Francisco was about something more than preventing a recurrence of past mistakes, he said. It was, above all, about the promise of the future, and “unfortunately, it is precisely this part that has failed to become a reality.”

Some countries saw neither the limits of their foreign policy ambitions nor forms of statehood other than their own, which gave rise to many of today’s geopolitical problems. “The States that refuse the pattern imposed from outside and which choose to defend their sovereignty have paid a dear price for it,” he said, offering Cuba as an example. That country, which some 50 years ago had taken an “historic choice” to pursue an independent development path, had since been met with rejection and an economic blockade “by those who think they can continue to write the history of mankind in the twenty-first century in the same manner they [had done] before”. Attempts to make anyone do something against their will were doomed to fail, he warned. “The time of imperialism, in whatever lofty slogans it is now being dressed — ‘democracy’, ‘human rights’, or ‘good governance’ — is irreversibly gone,” he declared.

Further, many countries were struggling under a burden of economic challenges resulting from four decades of market fundamentalism, he said. That policy, pursued relentlessly by its proponents, had led to a rise in inequality, and had perhaps even left a time bomb that would detonate years from now, causing untold upheaval for future generations. Another troubling trend undercutting the “spirit of San Francisco” was the double standard routinely used in foreign policy, he said. Indeed, the major Powers were willing to go to any lengths to cater to the interests of their friends, yet, when it came to engaging with opponents, they employed “forced inoculation” of democracy and human rights. “Guided solely by their own interests, these parties, who were shaking your hand yesterday, today openly contribute to your downfall.”

Such “unscrupulousness and barbarity in foreign policy” had all but sidelined the United Nations, he said, and as such, reviving the spirit of San Francisco would require a return to the principles of multilateralism, justice and cooperation. Belarus did not have all the answers, but the areas requiring the greatest work included the rule of law, politics, economics and the environment. Above all, to ensure that the law was bolstered on a global scale, international law must be made fully functional, he emphasized, cautioning that “trendy concepts” and “arbitrary interpretations” of the Charter, such as humanitarian intervention and the responsibility to protect, must be eschewed. He said there was a need to tackle structural issues by ending the prevailing “dysfunctional multipolarity” in favour of building an effective global system based on functioning partnerships, balanced economic mechanisms and comprehensive cooperation to tackle climate change.