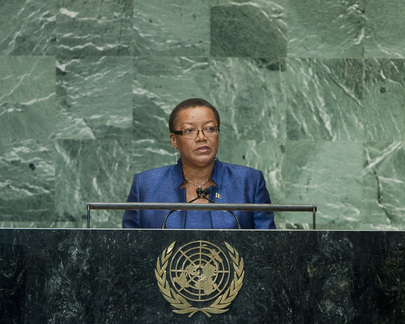 MAXINE MCCLEAN, Minister for Foreign Affairs and Foreign Trade of Barbados, said that despite being a small island developing State vulnerable to the global crises, her country had retained its stability and made great gains in its standard of living through partnership among all sectors of society. However, efforts to address threats such as rising prices and a decline in foreign investment had been undermined by the fact that, having achieved the classification of a middle-income developing country, her country had been graduated from grant and concessionary financing by multilateral institutions such as the Inter-American Development Bank and the World Bank. “There is a clear need for greater equity, fairness and transparency in the process used to determine classifications and resource allocation”, she said, stressing that the narrow current criteria used for such purposes, such as per capita income, must be expanded to take into account vulnerabilities, as the Secretary-General himself had advocated. She supported, therefore, work on developing new indices.

Among the threats to the survival of countries like hers, there was no greater one than climate change, she stated. “Inaction or inadequate action is inexcusable and morally indefensible, given the level of certainty of the scientific evidence before us and the technological and financial tools at our disposal to effect the necessary change”. A new legally binding agreement that would take effect after 2020 was indeed needed, but it would be meaningless unless ambitious actions were taken now to reduce emissions and support the adaptation of vulnerable developing countries. In Doha, clarity and a greater sense of urgency was needed in both areas to avoid potentially catastrophic impacts. At a high-level conference on sustainable energy for small island developing States, hosted by his co-country and the United Nations Development Programme (UNDP), some 22 small island developing States agreed to a spectrum of voluntary commitments for transformation to low-carbon renewable energy. Commending development partners that had already agreed to support the initiative, she called for others to join them.

In all areas, she pledged that Barbados would do its part in ensuring successful follow-up to the Rio+20 Conference. Noting that the Assembly this session would consider a resolution on the sustainable development of the Caribbean Sea, she affirmed support for an integrated management approach that involved all relevant stakeholders in that regard and she called for international support for the Caribbean Sea Commission. In addition, the great threat posed to the region by trafficking in illicit drugs and firearms underlined the need for legally-binding arms trade mechanisms, she said, emphasizing that an Arms Trade Treaty must cover small arms and light weapons, as well as their components and ammunition. She was profoundly disappointed at the failure of the Arms Trade Treaty Conference to reach agreement. Cooperation with international and bilateral partners was also crucial to counter criminality and she looked forward to the imminent reopening of the Caribbean subregional office of the United Nations Office on Drugs and Crime (UNODC), which her country had again offered to host.

She supported comprehensive strategies for global conflict prevention and stressed the urgency of achieving the Millennium Development Goals while a post-2015 framework was discussed. Reiterating her country’s commitment to the rule of law and the principles of the United Nations Charter, she spoke out against the embargo imposed by the United States on Cuba. She encouraged constructive engagement between the two sides to bring about a quick resolution of the issue. Finally, she pledged continued support to multilateralism and reiterated there was a “crucial nexus between development, peace, security and human rights”. The United Nations was the only global body with the unquestionable legitimacy to lead a global response to the challenges facing humanity.