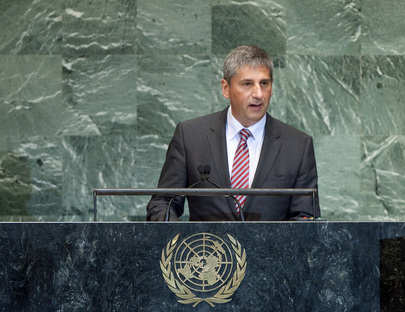 MICHAEL SPINDELEGGER, Vice-Chancellor and Federal Minister for European and International Affairs of Austria, said the conflicts in Syria and Mali, as well as the ongoing reform processes in many parts of the Arab world, demonstrated that today’s crises and challenges could only be faced through concerted multilateral action. On Syria, he said the Security Council must assume its responsibility and the violence must stop immediately, to be followed by meaningful dialogue. There would be no solution unless President Assad stepped aside, he added. Expressing full support for the transitions occurring in the Arab world, he encouraged the newly empowered authorities to fulfil their mandates for democratic change in a responsible manner, emphasizing that people’s aspirations for dignity and freedom must be satisfied. He also reiterated the strongest possible condemnation of the recent attacks on diplomatic missions.

Turning to other situations, he called on both the Israeli and Palestinian leaderships to finally assume their responsibilities and facilitate lasting peace and security for future generations. The situation in Mali also demanded concerted action, he said, describing the high-level meeting on Wednesday as a move in the right direction. Austria fully supported efforts by ECOWAS to find, together with the United Nations, a lasting political solution in Mali and the Sahel region as a whole, he said, adding that his country would advocate for increased support from the European Union in that regard.

The peaceful settlement of disputes could only be achieved through open dialogue based on mutual respect, of which Austria had a long tradition, he said, adding that his country was proud to host the upcoming Fifth Global Forum of the Alliance of Civilizations, as well as the inauguration of the King Abdullah bin Abdulaziz International Centre for Interreligious and Intercultural Dialogue in November. Having been elected to the Human Rights Council in 2011, Austria also fully supported that body and its mechanisms, particularly the Universal Periodic Review. The Council was best placed to react swiftly to human rights emergencies, as shown by its responses to the crises in Syria and Libya. Human rights violations must be investigated thoroughly and perpetrators must be held accountable before credible judicial institutions, including the International Criminal Court, he said.

He went on to say that his country planned to continue working on the priorities it had pursued while a member of the Security Council — protection of civilians, safety of journalists, empowerment and protection of women, freedom of religion and belief, and protection of children. As Chair of the Group of Friends of the rule of law, the country would also continue to work on the follow-up to this week’s high-level meeting on that subject. In addition, as host of IAEA headquarters, Austria was deeply concerned over proliferation threats in several regions, he said, adding that the creation of a nuclear-weapon-free zone in the Middle East was more urgently needed than ever, as was the need for Iran finally to provide credible evidence for the peaceful nature of its nuclear programme and engage in earnest talks. Austria was committed to helping move the stalled multilateral disarmament negotiations forward, he said, emphasizing that it was critical to move beyond a strictly military approach to nuclear weapons as such an existential threat to humankind could no longer be handled exclusively by a few States as a matter of national security.