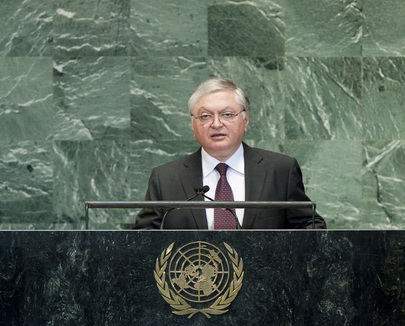 EDWARD NALBANDIAN, Minister of Foreign Affairs of Armenia, recalling that the theme of the Assembly’s sixty-seventh session was the peaceful settlement of disputes, said that, unfortunately, hate and intolerance were continuing to spread in some parts of the world. “We have yet to dig into the roots and causes of such situations, or to have the courage to openly ask difficult questions and face sometimes painful responses”, he said. It was in that context that, year after year, Armenia had been raising its concerns over the militaristic rhetoric, blatant violation of international commitments and “anti-Armenian hysteria” being instilled into the Azerbaijani society from the highest levels of its leadership.

The most recent case was that of the Azeri Government’s release and glorification of the murderer Safarov, who had slaughtered a sleeping Armenian officer with an axe during a North Atlantic Treaty Organization (NATO) programme in Budapest. The Azerbaijani leadership had made Safarov a symbol of national pride and an example for youth to follow, he said. The Council of Europe Commissioner of Human Rights had warned that “to glorify and reward such a person flies in the face of all accepted standards for human rights protection and rule of law”; the European Parliament President, the United Nations High Commissioner for Human Rights and others had also taken a stand against such actions. “It is clear that the international community should not tolerate the attempts of the Azerbaijani leadership to adjust the international law to their own racist ideology”, he said, adding that the international community must also not tolerate attempts by that country to “replace the rule of law with the rule of oil”.

The Safarov scandal had seriously undermined the negotiation process on the Nagorno-Karabakh region, he said. Azerbaijan posed a threat to security and stability in the region, with threats to use force against Nagorno-Karabakh and Armenia, and by “unprovoked daily warmongering” by its leadership. Through those actions, among others, it rejected the proposals of the three Co-Chair countries on the consolidation of the ceasefire agreement and on the creation of a mechanism for investigation of incidents on the line of contact. Indeed, while Armenia, together with international mediators, was exerting efforts around the negotiating table, Azerbaijan was multiplying its military budget, increasing it more than twentyfold in the last few years, and “boasting about it”.

“ Armenia and the international community are speaking in one language regarding the Nagorno-Karabakh issue”, he said. Armenia’s position was in line with the various conflict settlement documents adopted over the years, including the frameworks of the Organization for Security and Cooperation in Europe (OSCE) Astana Summit of 2010 and the Ministerial Conferences of Helsinki (2008), Athens (2009), Almaty (2010), and Vilnis (2011), among other agreements. Despite the intensive efforts of the three Co-Chairs, however, it had been impossible to reach a breakthrough in the conflict resolution, because the Azerbaijani side rejected ,one after another, all proposals presented by the mediators.

Finally, he expressed concerns about the developments and the worsening humanitarian situation in Syria, which directly affected a large Armenian community living in that country. The community — mainly formed by the survivors of the Armenian genocide in the Ottoman Empire in the beginning of the twentieth century — was now struggling for life, as were many Syrians. Armenia, for its part, continued to receive refugees feeling the conflict in Syria. As descendents of a nation that had survived the horrors of genocide, Armenia was convinced that the international community should stand together in the recognition and strong condemnation of genocides, and be able to prevent them. “It is due to the absence of this unanimity that humanity witnesses new attempts of crimes against humanity”, he concluded, urging Member States to recommit themselves to a world where the crime of genocide would never happen again.

The representative of Armenia responded by saying that the statement by his counterpart from Azerbaijan was based on “even more lies”.  He recalled the genesis of the conflict and asked:  “How could the Armenians in the ‘Nagorno Karabakh Republic’ want to live with their murderers?”  Apparently, Azerbaijan’s strategy was to tell so many lies that people would get used to them.  Those racist and xenophobic lies were routine, and even the President of that country had said Armenians were “the enemy”, he said, noting that in much of the civilized would, such rhetoric was punishable by law.  No Azerbaijani had any historical, moral or legal right to tell the people of Nagorno Karabakh where or how to live, he stressed.

The representative of Armenia said he really wondered about Azerbaijan’s memory, as he set out the events of the 1990s leading up to the independence of the “ Nagorno-Karabakh Republic”.  Those facts had occurred not so long ago and there was no need to “turn them upside down”, he said.  Armenia and the international community were speaking “one language” on the issue and it was time for Azerbaijan to listen to that voice.