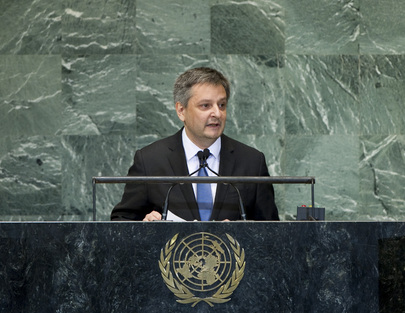 GILBERT SABOYA SUNYÉ, Minister for Foreign Affairs of Andorra, recalled that a year ago from the same podium, he had reasserted the notion of compromise as an essential value and core feature of political endeavour. That meant compromise as a deep-seated belief in the values of democracy, respect for human rights and the rule of law; as the assumption of individual responsibility in a common project; and as a pledge to dialogue and a capacity for understanding. However, “on the path of compromise or the path of the right balance, we cannot and must not abandon the defence of human rights, the rule of law, and the most essential democratic values such as freedom of expression”, he stressed, adding: “Establishing the fair balance does not mean engaging in a balancing act. To be fair, the balance must be based on strong principles: there can be no excuse for violence or intolerance.”

Welcoming the launch of the Secretary-General’s “Education First” initiative, he said his country would embrace education as a tool for encouraging democratic values, respect for human rights and the rule of law. Andorra was sensitive to education, not only in the sphere of international cooperation, but also domestically, as its unique, multicultural and multilingual approach to education – featuring Andorran, French and Spanish public systems — in a small society with its own identity had not brought problems, but rather had been an asset and an essential part of “our social cohesion”.

While Andorra had one of the oldest and most stable parliaments and political systems on the planet, women had not won the right to vote until 1971, he said. Yet, only 40 years later, in 2011, the people of Andorra had elected a parliament with the second highest number of female representatives in the world. “History shows us that what appeared utopian not so long ago is reality today,” he noted. The need for rapid and profound change had also arrived in Andorra, he said, recalling that a year ago, the country had had one of the most closed economies on the planet, and placed significant barriers to inward investment, while foreigners had had to meet costly requirements to attain full economic rights. Today, only 12 months later, “the Andorran economy is 100 per cent open to foreign capital, and every foreign resident is granted full economic rights from the first day of his or her residency”, he said.