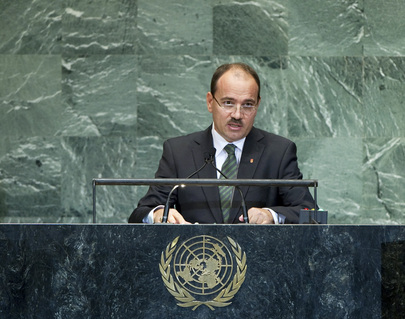 BUJAR NISHANI, President of Albania, said that, even though some countries had made progress in their efforts to lift people out of poverty, and to promote democracy, human rights and women’s empowerment since the last general debate, many issues remained to be addressed. For example, despite heightened global awareness, the effects of climate change continued to be a threat and the world economy remained worrying. Moreover, threats to peace in some regions showed “how far we still are from achieving desired global security”. It was, therefore, reasonable to expect that the United Nations — “the Organization we have placed at the centre of the international architecture” — to be more responsive, efficient, effective and transparent.

He went on to say that over the years, his country had steadily increased its participation in the activities of the United Nations, including peacekeeping operations. Most recently, it had been particularly devoted to the ongoing organizational reform effort and the need to ensure the world body’s institutions and mechanisms worked in a more efficient and coherent manner, especially as global needs became more complex. As one of the “Delivering as One” pilot countries, Albania had hosted the fifth high-level conference on the status of that initiative in June, he recalled, noting that the meeting had adopted a solid outcome document that hopefully would provide valuable recommendations in light of the upcoming Quadrennial Comprehensive Policy Review.

He said he was proud to be from a country known for its openness and tolerance. Indeed, Albanians devoted special attention to those who had come to their country to escape the horrors of war, and had risked their lives to save those in need “knocking at their door”. In that light, Albania maintained its strong belief in and support for the dialogue among civilizations, he said, adding that the reckless actions of disruptive groups must not be allowed to derail the genuine efforts of peoples and culture to reach a batter understanding of each other. In that regard, he said, while Muslim and Christian Albanians alike had been saddened and angered by the “good for nothing” anti-Muslim video, they had expressed their indignation “by simply ignoring such nonsense”.

Regrettably, some parts of the world had not had the same reaction and had instead used the video’s release to fuel blind and deadly violence, he continued. The international community must make clear that acts of terrorism or extremism carried out by isolated, ill-intentioned groups should never be confused with the attitudes of entire societies or Governments. “Yet, no legitimate anger can excuse illegitimate violent acts”, he emphasized, saying Governments and societies, as well as political and religious leaders, should oppose such actions. Albania condemned the attack against the United States consulate in Benghazi, Libya, as well as any attack against diplomatic premises whose mission was to promote understanding and cooperation among nations.

Closer to home, he recalled that the Balkans had once been a troubled “hotspot” of tension and conflict, but had been profoundly transformed with the birth of six new States of the former Yugoslavia. “We all know it has not been easy and we all know why,” he said. However, what mattered most was that the ghosts of the past had led Eastern Europe to new realities and peoples. Kosovo now played an important role in the region’s peace and stability, and continued to grow stronger, despite “all kinds of obstacles created by those who still cannot accept reality”. While applauding those who had recognized Kosovo’s declaration of independence, he denounced “the same old redundant arguments” put forward by Serbia on the matter. Indeed, “what failed to be achieved by war won’t be carried out through propaganda either”, he said.