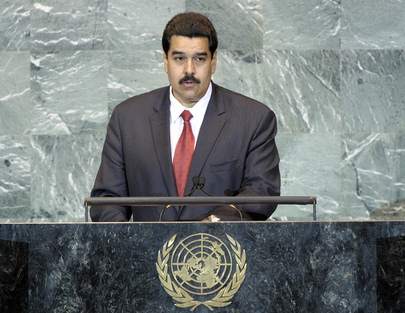 NICOLÁS MADUROS MOROS, Minister of the People’s Power for Foreign Affairs of Venezuela, reading a message from President Hugo Chávez, reaffirmed his country’s commitment to justice, equality and peace, stressing that peace should be sought through international laws. The Charter’s preamble, which talked of saving future generations from war, was a “dead letter”, since wars, since 1945, had inexorably multiplied. Indeed, Libya now lay bloodstained and in ruins, and since 11 September 2001, an unprecedented, imperialist and permanent war had begun. Why was the United States the only country that had military bases all over the world? he asked. What was it so afraid of that it had to allocate such a staggering budget for its military power? Why had it unleashed so many wars? The United States Empire had appointed itself to be a judge of the world, although no one had asked it to do so, and today, Clausewitz’s famous maxim had been reversed: politics was the continuation of war by other means. The new cycle of wars, which had started in Libya with the sinister goal of refreshing the global capitalist system, posed a serious threat to global peace, he said. At the same time, the world was marching inexorably towards ecocide; global warming and its frightening consequences were “announcing” it, and while energy and food prices rose, capitalism continued to trespass all limits with impunity. But there was a greater power than that of military force and nuclear bombs: the power of good, of morality, of humanitarianism and the human spirit. It was imperative to unleash a great political counter-offensive to prevent further war, he said. Recalling that Venezuela, like the African Union, had been actively advocating for a peaceful resolution to the Libyan crisis, he said the logic of war had won out based on premeditated lies regarding the bombing of innocent civilians by the Libyan Air Force. Asking how the North Atlantic Treaty Organization (NATO) could conduct more than 20,000 missions against the Libyan people if there was a no-fly zone called for in Security Council resolution 1973 (2011), he suggested that the intention of the military intervention had been Libya’s re-colonization, and he called for the immediate cessation of the bombing operation. Asking why Libya’s National Transitional Council was granted a seat in the General Assembly while Palestine’s admission to the United Nations was blocked, he voiced unrestricted support to the Palestinian national cause. Moreover, only the Syrian people could decide their fate in light of the right to self-determination. In the Horn of Africa, $1.4 billion in assistance is needed to prevent more than 12 million people from dying. It was also time for the United States to end its criminal blockade of Cuba and to release the five Cuban anti-terrorist fighters it was holding hostage. Underlining the continuing “[United Nations] crisis”, he said it was clear the Organization could not improve from the inside. If the Secretary-General, along with the President of the International Criminal Court, took part in an act of war, as was the case in Libya, nothing could be expected from the current structure. There was no longer time for reforms. If the commitment was not made for “re-founding” the United Nations, the Organization would lose its remaining credibility. That re-founding must start with the elimination of both the permanent membership and power of the veto in the Security Council. The General Assembly’s decision-making power should be democratically maximized and the Charter should be reviewed with the aim of drafting a new one. Furthermore, an alliance of the South must lead the way to peace.