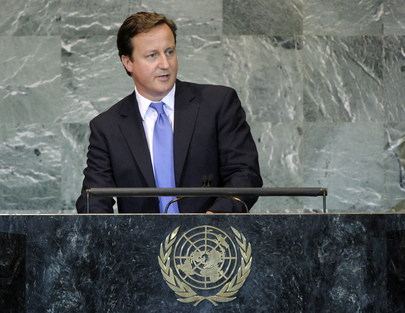 DAVID CAMERON, Prime Minister of the United Kingdom, addressing the Assembly for the first time, said last week he had been in Tripoli and Benghazi, where he had witnessed the hunger of a people eager to get on with writing a new chapter of freedom and democracy for their country.  “This has been the most dramatic episode of what has been called the Arab Spring,” he said, arguing that such events showed that the United Nations required a new way of working.  The Arab Spring was a massive opportunity to spread peace, prosperity, democracy and security, “but only if we really seize it”.  Events had presented a challenge to Europe to reform its aid strategy; to the African Union to meet opportunities of this century with the same courage that had won its liberation in the past; to Israelis and Palestinians to take bold steps to come to the table for peace; to Iran and Syria to give their peoples the freedoms they deserved; and to the United Nations.

“You can sign every human rights declaration in the world, but if you stand by and watch people being slaughtered in their own country, when you could act, then what are those signatures really worth?”, he wondered.  The people of the Arab world had made their aspirations clear:  they wanted transparency and accountability of Government; fair, consistent rule of law; the chance for a job; the freedom to communicate and the opportunity to participate in shaping their economies as citizens with rights.  There would be “wrong turns” along the way, not least where people had inherited sectarian divisions, weak political parties and politics distorted by the false choice between repression and Islamist extremism.

But, such developments created an opportunity for people who had long been sold short by their Governments, he said.  Just as help had been given in 1989 to those who torn down the Berlin wall, so now was there a duty, as people in the Middle East and North Africa had given voice to their hopes for democratic societies.  At the same time, he cautioned against thinking that, because people in the region wanted democracy, they wanted it in the same way.  A template could not be imposed.

He went on to say that participatory government involved more than voting.  The Assembly had heard from the President of Iran, who did not remind delegates that he led a country where there were elections, but where freedom of speech was repressed, accountability of free media was avoided, and those who argued for a better future were detained and tortured.  “We should never pretend that democracyis enough,” he said.  Libyans had liberated themselves.  All had shown courage in driving out [Muammar al-]Qadhafi.  The United Nations had played a vital role in authorizing international action, and in doing so, prevented Benghazi from joining Srebrenica and Rwanda in history's roll call of massacres the world failed to prevent.

Outlining challenges ahead, he said the economies in that region had underperformed, pointing to nations dependent on oil revenues that had failed to diversify or connect themselves to the wider world.  Less than 4 per cent of North African trade was in the region and the promise of economic reform had not been fulfilled.  It was up to the people to determine the future, and he urged them not to reject something they had never had:  an open, fair and transparent market economy.  The need for their economic success was vital, as 60 per cent of people were under age 25, and 50 million jobs must be created by 2020 to keep pace with the population.  And those jobs should not just be for men:  “You cannot build inclusive political systems if you lock out women,” he said.

While what was right for Libya would not necessarily be right everywhere, the international community had found its voice in that country.  “We must not now lose our nerve,” he said, underlining the need to speak out — and act as necessary — to support those seeking new freedoms.  It was time to ensure that the billions of euros spent in the region annually were used to support reform that met peoples’ aspirations, and it was time to stop denying the people of the region fair access to European markets, particularly in agriculture.  The United Nations must stand up against regimes that persecuted their people.  There was a need for reform in Yemen.  In Syria, the Security Council must adopt a resolution threatening tough sanctions.

The voice of the African Union was vital, too, he said, especially in pressing the world to meet its aid commitments.  A key part of the Arab Spring was for Palestinians to have a viable State of their own, alongside a safe and secure Israel.  He strongly supported that.  But no resolution could substitute for the political will necessary to bring about peace.  That would come when Palestinians and Israelis talked, made compromises, built trust and agreed.  The international community’s role must be to support that, notably by defeating those who embraced violence, and by stopping settlement growth.

While some had argued that reform threatened stability, the opposite was true:  reform was the basis for stability, and authoritarianism threatened it.  With that, he said political and economic reform in the Middle East was vital for defeating Al-Qaida.  Terrorist activity must be met with a strong and resolute security response.  Al-Qaida and its offshoots must know they had no safe hiding places.