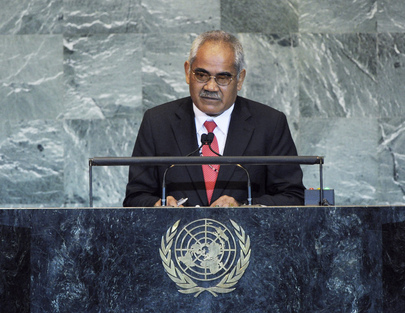 Willy Telavi, Prime Minister of Tuvalu, said the unprecedented impacts of globalization and the global economic and financial crisis had a profound, critical negative impact on Tuvalu’s economy. The Tuvalu Trust Fund, the nation’s main source of revenue, had been severely affected, forcing the Tuvalu Government to cut basic services for the population. He called on the international community and development partners to urgently fulfil their commitments to the least developed countries by implementing the Istanbul Programme of Action. Tuvalu would do its part by integrating the action programme into the Tuvalu National Sustainable Development Strategy. As a least developed country, Tuvalu was highly vulnerable to global economic shocks, the impact of climate change and disease outbreaks. He called on the international community to take those factors into account when considering the graduation criteria of least developed countries.

Last month, Tuvalu published its second Millennium Development Goals progress report for the 2010-2011 period, he said. Tuvalu would most likely achieve five of the goals by 2015. Still, such progress could be reversed overnight due to the country’s economic and environmental vulnerabilities. On United Nations reform, he said the process of reforming the Assembly and the Council had taken too long. It should be expedited and given a more realistic timetable. The United Nations continued to turn a blind eye to Taiwan’s contribution to maintaining global peace. He strongly urged the Organization to recognize Taiwan’s commitment as a development partner. He called on United Nations subsidiary bodies, notably the World Health Organization (WHO), International Civil Aviation Organization (ICAO) and the United Nations Framework Convention on Climate Change, to allow Taiwan to fully participate in their meetings and activities.

For a small island developing State like Tuvalu, climate change was a security issue that threatened its survival, he said. The upcoming meeting in Durban of the Conference of the Parties to the United Nations Framework Convention on Climate Change must deliver key outcomes. It must adopt amendments to the Kyoto Protocol to allow for a second commitment period to immediately follow the first. That would be necessary to ensure the continued functioning of the Clean Development Mechanisms and finance for the Adaptation Fund. It must pave the way for rapidly developing an international mechanism to address loss and damage. The meeting must also focus on reducing emissions caused by deforestation and forest degradation.

Moreover, all major greenhouse gas emitting nations must take more decisive action to reduce emissions, he said. Calling the current pledging system inadequate, he said he would seek a mandate in Durban to begin negotiating a new legally binding agreement for major emitters that had not implemented Kyoto commitments. There must be a focused chapter on the needs of small island developing States. When considering the green economy, it was essential to carefully explore how to redirect the current global trading system to properly reflect those States’ needs. He called for: accessible, affordable, renewable energy and energy-efficient technologies; strategies to protect oceans; and new preferential trade agreements to help small island developing States overcome their size disadvantage.